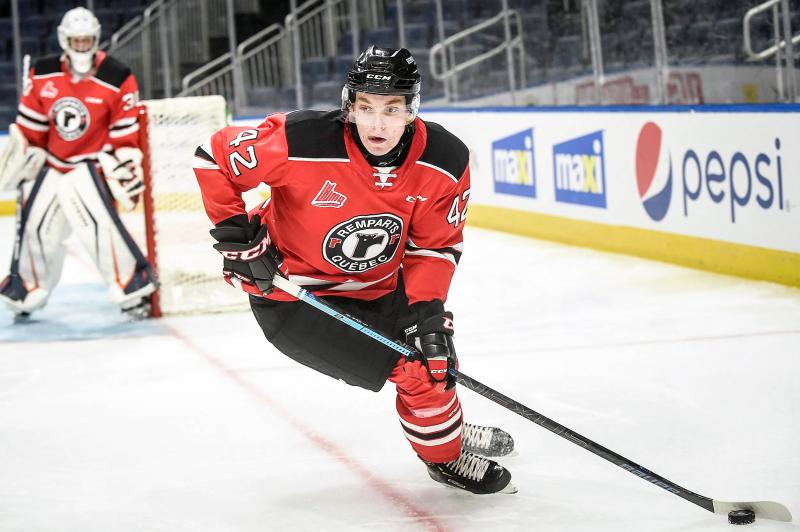 The Remparts will be able to count on at least two regular players returning from their professional camps for this weekend's games, Saturday and Sunday, against the Gatineau Olympiques. After Mikaël Huchette of the Flyers on Monday night, defender Evan Nause was cut from the Florida Panthers on Tuesday.

The 19-year-old back had played his first preseason game in the Florida squad on Monday night, against the Nashville Predators. It was used for 19:7 in a 4-0 loss.

It could be a surprise to see Nause again so quickly, after Patrick Roy had mentioned a few times during the Remparts' training camp that he expected the Panthers to offer a long audition to their second-round pick in 2021. However, it seems that the team's new management, led by head coach Paul Maurice, wants to have the roster they will be using this season in their hands as soon as possible. /p>

Top scorer among the team's defensemen last year, with 46 points in 58 games, Nause will once again be a part important part of the defensive brigade of the Remparts.

“Our general at the back will be Nicolas Savoie and I think Nausy can play the role of quarterback. On the other hand, our team works by committee. We have a core of good players and a lot of depth. One night, one pair will do a good job and the other night it will be another.”

Huchette will be back in the team environment on Wednesday, while Nause is expected to join his teammates Thursday or Friday.

Although he was satisfied with the return of two of his pillars on Tuesday, Patrick Roy continued to focus on the squad that was on the ice in training, the one that led the Remparts to two victories over the weekend. opening.

“I was eager to see this morning what state we would be in and I did not see anyone complacent. Everyone arrived with their work boots. We keep moving forward.”

Among the players who gained points in the absence of the big guns, Roy notably cited Kassim Gaudet and Andrew Gweon.

“Since the start of the camp, I have had to say that Gaudet has been doing really well that and it catches my eye. In Gweon's case, he was really good on the penalty kill last weekend. He did the job against good lines because we must not forget that Chicoutimi and Victoriaville had quite a few full squads,” he mentioned.

Inevitably, the return of players from their professional camp will relegate others to support roles or even to the bridge. A situation which, if well managed, should not harm the development of the latter.

It's like that every year, anyway. Last year, the Remparts counted on nine defenders, so most of the time, young Mathieu Wener and Samuel Lachance watched the games from the stands.

This will be the case again this season, since if everyone returns from the NHL camps, the Red Devils will have 25 players, including two “extras” in attack, two in the back and one in front of the net.

“He is playing more and more with confidence. You see that having worked with us, having practiced and having worked with Ben [assistant coach Benoit Desrosiers], today we see some progress. Of course, playing is the best medicine, but at the same time it allowed him to gain experience,” said Roy after the victory against the Victoriaville Tigres on Saturday.

“THEY WILL BE TESTED”

Called to develop his thoughts during an interview with Le Journal,On Tuesday, Roy added that the talent in their roster was a significant advantage for these players who won't be playing many games this season.

“Just in practice, think about it: they're going to be tested by guys like Bolduc, Rochette, Malatesta, Gaucher up front, and Savoie, Nause, Komarov and Truchon at the back. You rub shoulders with the same guys, it's sure that you learn and that you get tested in training. Of course, the guy has to play, but sometimes we have no choice.

Last year, they actually “had no choice” , since they were spared from injuries, which does not mean that it will be the same this year.

“When it starts to fall, I know it, it falls. For now, we touch wood. We try to manage the schedule well.”