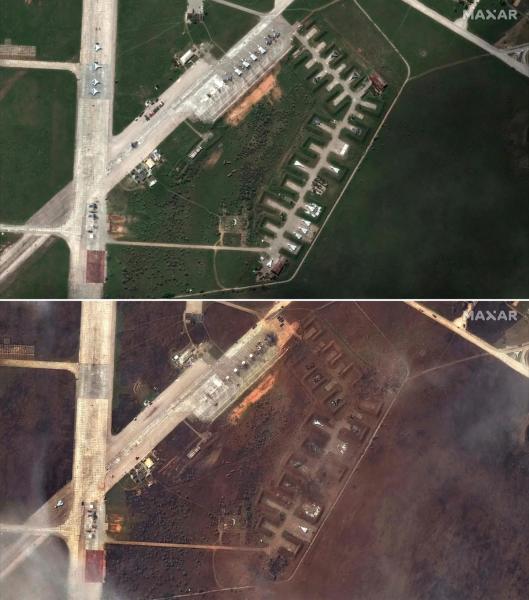 The explosions at a military airfield in the Crimean peninsula, annexed in 2014 by Russia, were presented by Moscow as due to an accident, but experts and satellite images appear to reveal the result of a Ukrainian attack.

Here is what we know about this episode of the war between Russia and Ukraine, which occurred on Tuesday:

Russia assures that no strike or bombardment targeted this military base located near the village of Novofedorovka, and that the explosions, which caused at least one death and seven injuries, were due to the explosion of ammunition intended for aviation.

Satellite images released Thursday by Maxar Technologies seem to contradict this version. These show that the airfield “was hit by something” and that at least nine planes were destroyed, Danish analyst Oliver Alexander told AFP.

“If it was an accident, it would have taken four or five people throwing their cigarettes in the same place or hitting the bombs with a hammer, it is very unlikely,” he added.

The exact cause explosions – a sabotage operation or a Ukrainian missile strike – remains unknown, however, says the expert.

Eliot Higgins, founder of the investigative journalism group Bellingcat, points out for his part that the images show three craters and “a massive fire through the base”.

“These craters can be interpreted as the result precise strikes with a long-range weapon,” he wrote on Twitter.

“To my knowledge, Russia has never lost so much aerial equipment in a single day and they must be deeply concerned about Ukraine's ability to make similar strikes elsewhere, especially on the Kerch Strait Bridge. “, built at great expense by Moscow to connect Crimea to mainland Russia, continues the expert.

Russia annexed Crimea in March 2014 after an intervention of its special forces on the Ukrainian peninsula, who quickly took control of the administrative buildings and surrounded the Ukrainian bases.

The new pro-Russian authorities installed by Moscow then organized a referendum to join Russia, denounced as illegal by Kyiv and the West, provoking a first wave of sanctions.

Since the invasion of Ukraine on 24 February, Crimea serves as a logistical rear base for Russian forces. The offensive on southern Ukraine that allowed Moscow to capture large swaths of territory in the first weeks of the war grew from there.

While it was rarely targeted, a previous attack The drone had hit the headquarters of the Russian Black Sea Fleet in Sevastopol on July 31, according to Moscow.

The explosions in Crimea have sent a wave of panic among tourists, with the peninsula a major summer destination for Russians, popular for its beaches and mountains.

Videos posted to social media on Tuesday showed the Kerch Strait Bridge, built at great expense by Moscow to connect Crimea to mainland Russia, swarmed by cars wanting to leave.

In other images, you can see hundreds of tourists fleeing on a beach, while large clouds of smoke appear on the horizon.

The head of the pro-Russian administration of Crimea, Sergey Aksionov, tried to reassure visitors in a video message by assuring that “all necessary measures have been strengthened to ensure the safety of civilian infrastructure and the population”.

The Ukrainian Ministry of Defense for its part “reminds everyone that the presence of occupying forces on the territory of Ukrainian Crimea is not compatible with the high tourist season”.

Unnamed Ukrainian officials quoted by The New York Times and The Washington Post acknowledged that Ukraine was behind the explosions.

Officially, Kyiv did not claim responsibility for the attack, preferring to be ironic.

Defense Minister Oleksiy Reznikov joked that the explosions could be caused by poorly extinguished cigarettes: “I think the Russian military at this airfield forgot a very simple rule: don't smoke. not in dangerous places. That's all,” he said on Wednesday.

He said the explosions should be “considered by the Russian military as a warning”.

The day before he had assured that they were “just the beginning”.

President Volodymyr Zelensky simply said in his evening speech after the explosions: “Crimea is Ukrainian” and Kyiv “will never abandon it”.