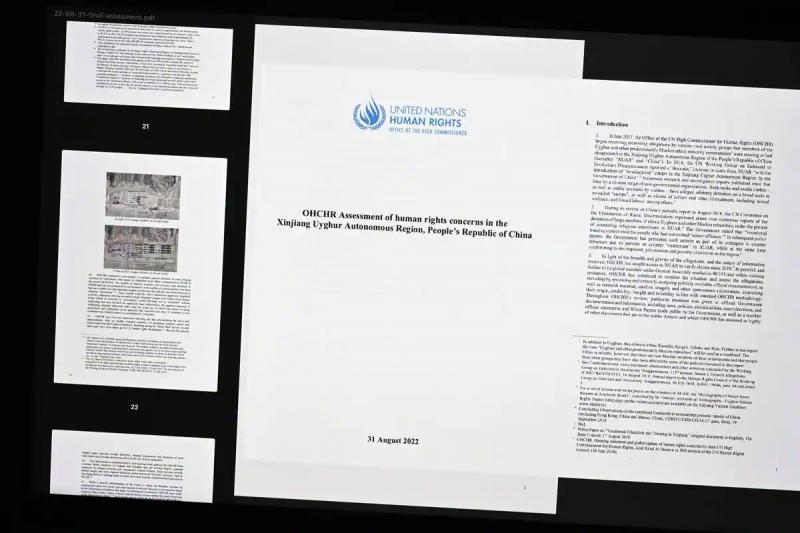 GENEVA | The UN has just published a long-awaited report on alleged human rights violations in the Chinese region of Xinjiang (northwest), in particular against Muslim minorities.

A mixture of interviews carried out by him and direct or second-hand information, he evokes the possibility of “crimes against humanity” but does not use the term “genocide” used by the United States.

Here are the five main allegations contained in this report, written by the Office of the High Commissioner for Human Rights (OHCHR).

Xinjiang has long been hit by bloody attacks.

The rest of the country has also been affected, including a stabbing attack on passengers at Kunming station (southwest) in 2014. It killed around 30 people, injured more than 140 and shocked the country.

China accuses separatists and Islamists from the ethnic minority of Uyghurs. She has since launched a relentless campaign in the name of counter-terrorism.

The UN report describes a “large-scale arbitrary detention pattern” in Xinjiang “at least from 2017 to 2019” in secure facilities.

China presents them as “vocational training centers intended to “de-radicalize” the inhabitants by training them in a trade.

The UN report cites documents, presented as coming from the Chinese authorities and listing a series of reasons to justify internment for “extremism”: having too many children, wearing a veil or having been convicted in the past.

With the presumed closure of the training centers, the UN also believes that “there has been a move towards formal incarceration” in order to continue to keep a certain number of people in detention.

< p>This method has become the “main means of large-scale imprisonment and deprivation of liberty”.

China denies these accusations. The definitions of terrorism and extremism are “clearly specified” and “exclude any arbitrary application”, she assures.

Without confirming them, the report considers “credible” the accusations of torture and sexual violence in internment establishments in Xinjiang.

People interviewed by the UN say they were immobilized and beaten. Some claim to have been raped or to have undergone “invasive gynecological examinations”.

“It is not possible to draw broader conclusions about whether there have been broader patterns of sexual and gender-based violence” in vocational training centers, the report notes.

“The total denial of the (Chinese) government vis-à-vis all the allegations” however “reinforced the indignity and suffering” of those who testified, denounces the UN.

The UN interviewed women who said they “were forced to have an abortion or have an IUD inserted after reaching the number of children allowed” by the national birth control policy.

“ These first-hand testimonies, although limited in number, are considered credible,” said the report again, noting the decline in the birth rate in Xinjiang since 2017.

China denies these accusations. She refutes any idea of ​​”forced sterilization” but concedes to apply in Xinjiang, as elsewhere in the country, her policy of limiting births, for a long time implemented with laxity in the region.

The UN report finds that China has an “extremely broad” interpretation of the term “extremism”, which has the consequence of criminalizing activities “related to the enjoyment of cultural life and nun”.

Wearing a hijab, closing a restaurant during Ramadan or giving your children first names deemed too Muslim (“Mohammed”, “Islam”, “Jihad”, etc.) are considered signs of “religious extremism” which “can lead to serious consequences” for those affected, according to the report, which is based on articles from several media outlets.

China says all “normal religious activities” in the region are protected by law.

It says it has renovated some mosques with public funds and set up new official training institutes for Muslim clerics.

According to the report, some elements of employment programs in Xinjiang “appear” to have “elements of coercion” and require “clarification” from Beijing.

OHCHR cites official Chinese documents mentioning the transfer of people from “vocational training centres” to factories. He thus wonders if such programs “can be considered as being carried out entirely on a voluntary basis”.

The UN does not, however, go so far as to repeat the accusation of “forced “, formulated by the United States and the European Parliament on the basis of reports by Western organizations.

China claims that “trainees” of “vocational training centers” can “choose their jobs freely and that they “earn a salary and lead a prosperous life”.