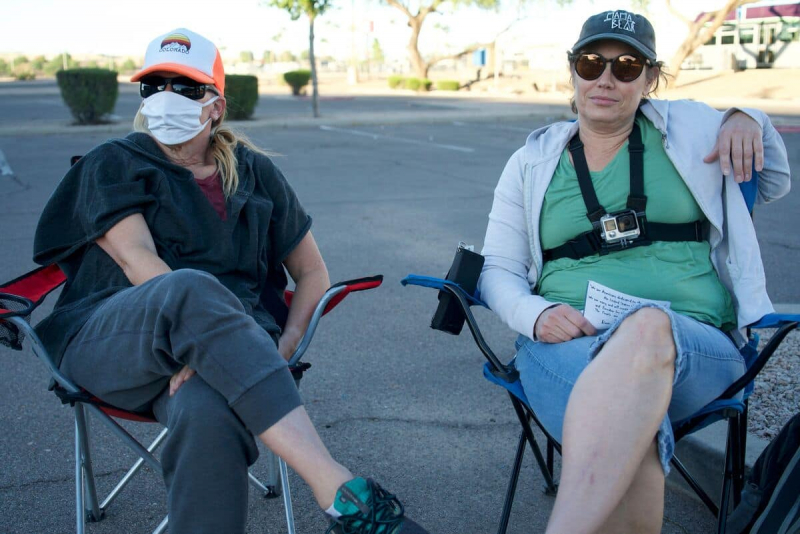 Influential figures from the movement that continues to deny Joe Biden's victory in the 2020 presidential election, mobilize an “army” of self-proclaimed vigilantes to monitor the electoral process, a maneuver likely to cause chaos , bullying and violence according to experts.

These conservative figures, like the populist Steve Bannon, instrumentalize misinformation and conspiracy to urge thousands of people to participate in monitoring the electoral process.

In this regard, the mid-term elections mandate of November 8 will serve as a test for the American democratic system.

In his podcast “War Room”, Steve Bannon this month urged his listeners to register to hold the polls, a political “call to arms”.

Sentenced to four months in prison on Friday for refusing to cooperate with the parliamentary inquiry into the assault on the Capitol by supporters of Donald Trump, Steve Bannon has appealed.

“Steve Bannon's appeal (…) leads to a real possibility that the election season will be chaotic”, advances to AFP Jennifer McCoy, professor of political science at the State University of Georgia.

“We could potentially see a lot of confusion, with voters prevented from voting and many problems during the counting of the votes if these new poll workers and partisan observers challenge the results that they do not like”. p>

Among the guests of Steve Bannon's podcast, Cleta Mitchell, a lawyer involved in Donald Trump's attempts to overturn the result of the 2020 presidential election in his favour, who is now part of the effort to raise a conservative “citizen army” to monitor the elections.

She says her organization, dubbed the Election Integrity Network, has trained more than 20,000 election observers across the country, most of them in key states that could determine the outcome of the ballot.

“ The left has been counting and controlling the electoral process without our oversight for too long. That period is over,” Cleta Mitchell wrote on her website earlier this year.

A “guide” distributed by his organization during training sessions throughout the country recommends that citizens be “always present” in polling stations, question the electoral authorities and carefully check that people wanting to vote have the right to do so.

Another guideline: find out if local justice officials are “friends or foes.”

“By supporting aggressive but vague instructions and raising the unfounded specter of widespread fraud, this unprecedented effort to raise an 'army' of citizens could lead to voter disruption and intimidation, massive protests, breaches in election security and other forms of crime,” writes Mekela Panditharatne of the Brennan Center for Justice research institute at New York University.

Authorities in Arizona said last week they were “deeply concerned” about the security conditions surrounding the vote, after two individuals in paramilitary gear were found watching a metal box where voters in that state can drop off their ballots in advance.

“Observing the vote in a neutral way is one thing, doing it in an intimidating way for voters potentially belonging to the opposing party is another,” said Larry Diamond, a researcher at the Hoover Institution. , a research institute at Stanford University.

“If pro-Trump extremists, who deny the legitimacy of the 2020 election, +observe+ the elections in a way that intimidates certain voters, for example people from minorities or very Democratic constituencies, this could threaten the election integrity.

Cleta Mitchell, who did not respond to AFP interview requests, does not appear to be short of funds. His organization is owned by a pro-Trump institute that raised nearly $20 million last year, including $1 million from an organization founded by the former Republican president after his defeat.

Donald Trump and his supporters, she argues, ” seek to completely delegitimize the elections”.

“The objective is to combine voting and corruption to the point that the idea of ​​relying on elections to appoint its leaders is compromised in the eyes of public opinion . »