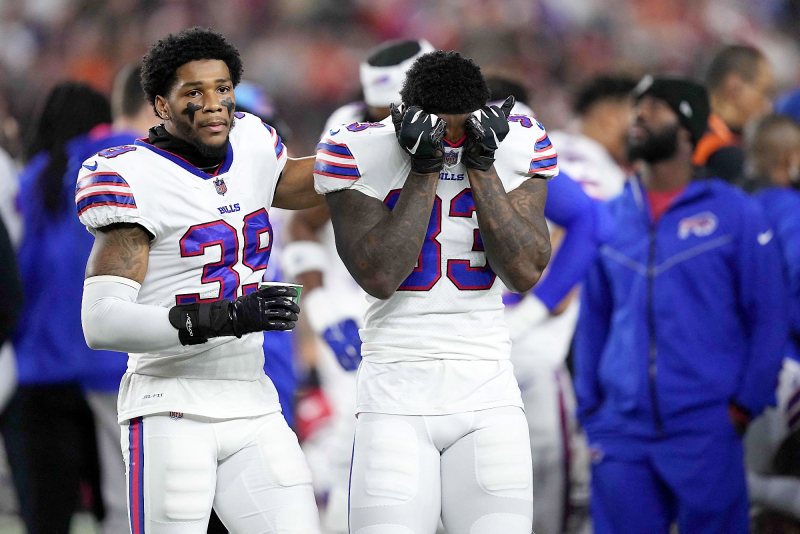 What was one of the most anticipated Monday night games of the year in the NFL between the Bills and the Bengals quickly became an afterthought. When suddenly a player is fighting for survival on the field, everything else becomes futile.

The Bills were fighting to hold on to the first place in the American Conference, which gives the right to home-court advantage in the playoffs. The Bengals were trying to dislodge them from that pedestal and a win would at least secure their division title. Damar Hamlin leads to a very simple observation, but often forgotten. Sport is just a game.

A serious game, yes, but a simple game. When the life of a human being hangs in the balance, first or second place suddenly becomes so ridiculous.

Life will obviously resume its course and 14 teams will soon enter playoff mode for the Vince-Lombardi trophy. Football will once again become the fabulous entertainment it is, a robust pain reliever against the failings of society.

For the moment, he occupies his rightful place, behind the scenes of a fight, a real one, which deserves all the attention.

Monday night, the NFL took way too long to confirm that the game was postponed or canceled.

The gruesome scene at which the players and coaches witnessed on the pitch drained all their energies and emotions. To play and risk your health for the good of a team, you have to have your head and your heart in it.

Broadcaster ESPN suggested the league initially ordered players to warm up for five minutes after the ambulance left for the game to resume. If that's really the case, that's callous insensitivity.

The NFL hours later denied issuing such a directive. However, on the field, there were many players who were warming up.

In such a dramatic situation, adults in the room need to come forward. Bengals and Bills head coaches Zac Taylor and Sean McDermott have fulfilled this role admirably by bringing their players together in the locker room. In such circumstances, it was the only thing to do.

You have to have been in a football dressing room to understand how unique it is. There are players from all communities, from all over America. Some come from poor and criminal backgrounds. Others come from wealthy backgrounds. There are hungry recruits and disillusioned veterans.

From all this disjointed social fabric emerges a team, a family, a group of different individuals. They are united by the fact that they are football players, but above all, human beings.

At the end of what was shaping up to be a furious fight, the Bills and the Bengals did not only made one. And such a demonstration of solidarity is even more powerful than a great football match.

The forces in attendance

With their second first-round pick, the Jaguars opted for linebacker Devin Lloyd, who is having a two-part first season. The former Utah player started out strong before slowing to the point of being relegated to a reserve role behind fellow rookie Chad Muma. Lloyd has reviewed the pitch more lately and seemed invigorated. With 112 tackles and eight knockdowns, he shows he has a lot of reach, despite the ups and downs. To be continued, Saturday night, against the Titans!

STATE OF FORCES IN THE NFL

It is with a heavy heart that the Bills will have to continue their season. The cardiac arrest suffered by the marauder Damar Hamlin has something to shake the troops. Football becomes very secondary for this team which is going through stressful times. Thoughts for this player.

Carrying Jerick McKinnon has become vitally important to the Chiefs offense through his prowess as a receiver. He had two reception touchdowns on Sunday, giving him eight this season. Only Marshall Faulk and Austin Ekeler have done so much as porters.

Brock Purdy had his fifth straight game with two touchdown passes. In the history of rookie quarterbacks, only Justin Herbert has done better with seven straight games in 2020. This time, he had to come back. The Niners are still battling for the top spot in the conference.

Gardner Minshew is not a bad reservist. The absence of Jalen Hurts for two weeks, however, is an eloquent reminder of his importance in the Eagles attack. Minshew had three turnovers and five sacks. Hurts hasn't had that this season.

The Bengals seemed to be off to a good start against the Bills in a Monday night game that quickly became an afterthought. This team plays with full confidence on both sides of the ball. It remains that nothing is guaranteed in its positioning for the series.

The Cowboys added another win over the Titans, but not cleanly with three more turnovers at their expense. Despite this worrying trend, they have racked up 12 wins in two straight seasons, their first since the 1994 and 1995 seasons.

The Chargers had their second-best rushing haul this season with 198 yards against the Rams. Austin Ekeler had his longest career run on a 72-yard touchdown. The Chargers are guaranteed to finish fifth or sixth in the conference.

Vikings win close matches, but when they lose, they lose horribly! Their four losses have come by average spreads of 22.3 points. They have reached their third center and offensive cohesion is greatly affected.

The Giants secured their playoff spot by backing the Colts to the count of 38 10. They scored at least 30 points for the first time in their last 44 games. They are now assured of sixth place in the national conference. A great accomplishment!

For the fourth time this season, the Ravens gave their opponents the game-winning touchdown in the final two minutes of the game. It's unthinkable coming from a team usually so well led and solid in every detail.

The Packers don't lose in December and January in the regular season. The Rodgers-LaFleur tandem is 18-1 in those two months. The Packers have caused 12 turnovers in their last four games. They had as many in 12 matches beforehand.

The Jaguars put a brilliant end to a nasty nine-game losing streak against the Texans by literally exploding them. There was no impact on the standings and they still need to beat the Titans on Saturday to make the playoffs, but they remain on fire.

Lions recovered after defeat of the previous week. They scored at least 30 points for the eighth time this season, tying their franchise record set in 2011. They need to beat the Packers in addition to a loss to the Seahawks to make the playoffs.

It was certainly not the most elegant of his career, but Tom Brady finds himself in the playoffs for the 14th straight year and for the 19th time in 23 years of career. It's still amazing! The connection with Mike Evans finally worked at full speed.

It's the third time under Mike Tomlin that the Steelers have started the season with a 2-6 record, only to go 8-8. They had also done it in 2006 and 2013. The team rallied from a 10-point deficit against the Ravens to stay alive.

The Patriots have seven defensive touchdowns this season, a franchise record and the highest total in the league since the 2017 Jaguars. Kyle Dugger alone has three, more than any Patriots receiver except for Jakobi Meyers.

A whole new life for the Seahawks, who stay alive for a playoff berth. Geno Smith has now made his three exes look bad this season, the Jets, Giants and Chargers. Rookie rusher Kenneth Walker III assisted with 133 rushing yards.

Cornerback Marshon Lattimore, on the sidelines since October 9, celebrated his comeback with a touchdown on an interception return against the Eagles. This team has missed him so much! The Saints are nevertheless eliminated from the playoff race after a disappointing season.

Quarterback Deshaun Watson completed just nine of his 18 passes, but three of them were good for touchdowns in his most productive game yet with the Browns. Les Bruns played their most complete game this season. They had to be eliminated!

By playing like a real lemon, Carson Wentz secured a one-way ticket out of Washington. The team can release him with no impact on the salary cap for next season. Coach Ron Rivera's bet to replace Taylor Heinicke went wrong.

The Jets elimination is now official. They haven't played in the playoffs since 2010. This 12 season streak is the longest drought in the league. In their five-game losing streak, they averaged just 12 points on offense.

Titans' playoff hopes will rest partly on the shoulders of quarterback Josh Dobbs on Saturday against the Jaguars. He looked better than Malik Willis, but the order will be huge for the pivot hired on the reserve team on December 21.

The Panthers pass defense looked completely outdated against the Buccaneers. The loss of cornerback Jaycee Horn hurt a lot. CJ Henderson was burned by two long touchdowns from Mike Evans. It will be a fifth straight season without a series.

The Falcons pulled out all the stops to defeat the Cardinals with their fourth quarterback. Nothing too encouraging for this team, which will need major changes in defense and in the receiving group.

The Rams are trying to cling on to meager shreds of positivism in this lost season and if there's one bright spot, it's the revival of Cam Akers. The carrier seemed finished at the start of the season and he has just had two games in a row over 100 yards.

Derek Carr hadn't amassed more than 310 yards once this season and Jarrett Stidham had 365 in his first career start. Not to get upset, but the Raiders should bring him back next year in open competition.

To say how bad the end of the season Cardinals is exciting, it looks like there's a battle brewing between Trace McSorley and David Blough over who will quarterback for the final game. In terms of suspense, we have already seen much more stressful.

Internal messages of support for Russell Wilson poured in despite another loss to the Broncos, who still held up well beaten against the Chiefs. It is still incredible that we have come to this. It will be quite a job to save it during the off season.

In the last four games, the Colts have been downgraded 161-58. They're clearly no longer competitive, which doesn't bode well for Jeff Saturday clinging to his job as interim coach. The defense, which held the fort, waves the white flag.

Quarterback- fullback Justin Fields gained 105 rushing yards in the first quarter against the Lions, then the Bears gained just 90 total yards in the next three quarters. They played with fire leaving Fields on the field to get beaten up in a lost cause.

If the Texans lose Sunday to the Colts, they will get the first draft pick. Quarterback Bryce Young shone in the Sugar Bowl, as in the last two seasons in Alabama. He, or CJ Stroud (Ohio State), will bring hope to Houston.