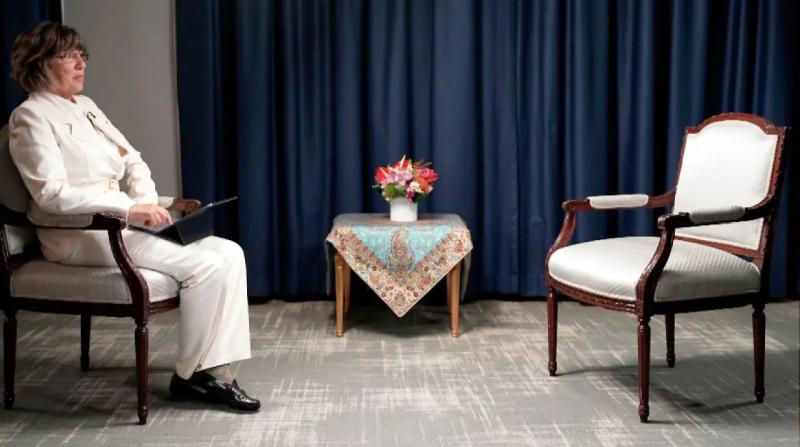 It's called having a forehead all around your head.

Christiane Amanpour, CNN's star journalist, was to do an interview with Iranian President Raisi At New York. But when the president's entourage asked Amanpour to wear the veil, the hijab, she refused. The interview has been cancelled.

The image of Christiane Amanpour, her hair down, sitting in front of an empty chair, is a huge middle finger to Iran's patriarchal regime.

Congratulations! It feels so good to see a western woman standing up in front of religious leaders.

Since the morality police arrested a 22-year-old girl, Mahsa Amini, in Iran for not wearing her veil properly, and since Amini died in prison, Iran has been rising .

Across the country, brave women are taking off their veils, burning them and defying the authorities.

One image more than any other symbolizes this revolt. We see a woman holding in one hand her burning veil and in the other a stone that she is about to throw against her oppressors.

How brave ! For me, this image is as strong, as symbolic as that of the young Chinese standing up to the tanks, Tiananmen Square in 1989.

An individual, alone in front of the oppressor, who stands with his only defense her determination and her courage.

Do you know what Amanpour replied to the collaborator of the Iranian president who asked her to wear the veil?

“We are in New York, where there is no law or tradition regarding the wearing of headscarves. I pointed out that no previous Iranian president had demanded it when I interviewed him outside of Iran.”

In Rome, we do as the Romans do.

Women journalists wear the veil when covering the news in countries where wearing the hijab (or burqa) is compulsory. But nothing obliges them to do it when they are in a free country.

If Amanpour had agreed to veil, you can imagine the message it would have sent to the brave women who are fighting right now in Iran?

If you are in Tehran and you risk your life by burning your veil, how could you have accepted that a woman wears it… in front of the leader of a regime who killed Mahsa Amini?

Amanpour is herself of British and Iranian descent. Surely the authorities would have been only too happy to display her image as a veiled woman on all Iranian screens.

Surely the message sent to Iranian women would have been: “Why do you refuse the veil here when this nice journalist miles away from here has obediently agreed to wear it? If she does, so can you.

Amanpour drew a clear line in front of a religious leader. “You can't order us, the free women of the West. »

Amanpour's gesture is not just a reflex of journalistic independence.

It is a concrete sign of solidarity with Iranian women.  ;

We expect no less from Quebec feminists.