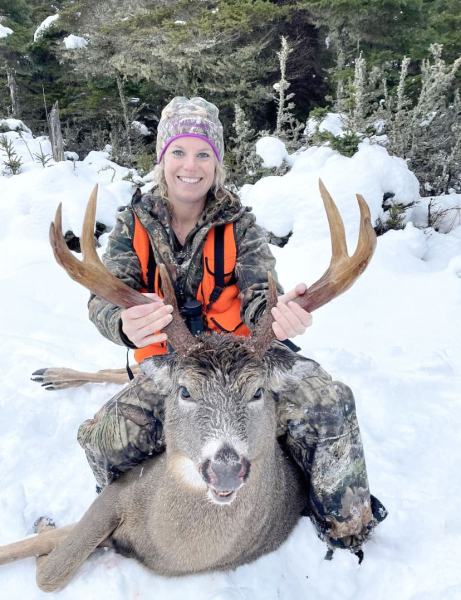 The enchanted island, considered the most game-rich in Quebec, will never cease to amaze with its resilience, its ability to regenerate and produce beautiful specimens.

< p>When you buy a package at Sépaq Anticosti, it's to live an exotic adventure where white-tailed deer are really in the spotlight. At this location, reputed to be the largest deer outfitter in the world, guests can go after cervids in sectors averaging 100 to 150 km2 where the density is between 12 and 15 animals per km2.

The webbed antlers of this monster still animate the dreams of Christian Ross. He intercepted it in the mature forest of Étang-Chicoine near recently regenerating plots.

The Menier deer, as they are nicknamed, are generally 10 to 20% less corpulent than their congeners in the continent.

The depth of the Anticostian forest is much less used than the proximity of roads and trails. The backcountry is home to big cervids that want nothing more than to play hide and seek.

This pretender's trunk and antlers are impressive. It was at Lake Martin that Mario Turmel collected this beautiful beast.

The flesh of these mammals is a lot tastier than ours, because they don't eat cedar, which often gives the venison a pungent taste.

During his stay at La Loutre 2, Dany Thériault, who we see with and without a beard, has foiled not one, but indeed two dominants.

Although the harvest stands at 1.7 deer per license holder, I am sure that anyone could bring back two deer if they were a little less selective. But now, everyone, and me first, is trying to take big trophies. We are far from the results of the Belle Province where only one out of three nemrod succeeds in hunting.

When the cold season drags on, this can lead to mortality that can cause the herd to decline.

Woods come in all sizes and shapes. Proof in support, this atypical panache, with drop pin, that I captured a few years ago at McDonald's.

“Some observers mentioned that the size of the antlers of the Menier cervids was smaller this fall, because the winter of 2022 had been really bad and had slowed their growth,” explains Daniel Lévesque, director of sales and customer service for Sépaq. Anticosti. “From the beginning of September until the November premiere, I must admit that surprisingly, with a few exceptions, there were few big plumes to be seen. The heat waves combined with the various moon phases were certainly not helping either. However, as soon as the cold, snow and rut arrived, the giant roe deer magically appeared until the end of the season.

I don't like the shooting of this photo. On the other hand, you can admire the size of the headdress of this superb Chicotte buck.

Sépaq Anticosti occupies 70% of the total territory of the island, or 5,585 of the 7,943 km2. This state-owned company manages the equivalent of 17 outfitters under the European plan without a guide, 12 others with a guide and 6 others under the American plan with a guide and meals. To find out more, call 1 418 535-0231, visit sepaq.com/anticosti or come and chat with Sépaq staff at the various hunting and fishing exhibitions, including the one next weekend at the Center des congrès du Sheraton at Carrefour Laval.

What to dream about

As a picture is worth a thousand words, today I present to you some pictures of beautiful bucks that of clients foiled late this fall.