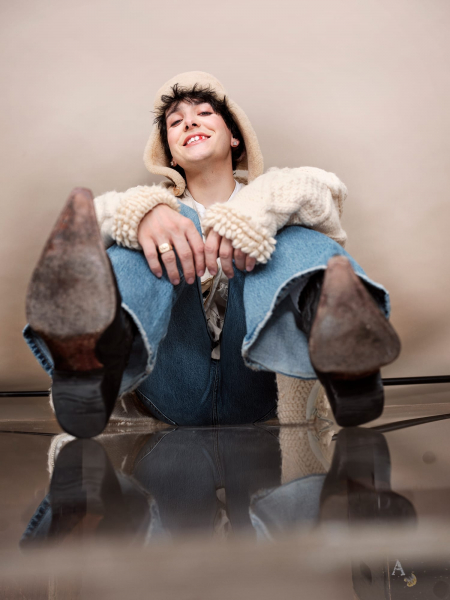 Provocative, colorful, unique, mysterious, outgoing, indomitable. There are many qualifiers to describe Hubert Lenoir since the success of his first solo album, Darlène, in 2018. Four years later, the 28-year-old artist from Quebec continues his journey by garnering accolades for his second project, PICTURA DE IPSE: Direct Music, the most nominated this year at the ADISQ gala. But who is hiding behind this public figure who leaves no one indifferent? We tried to pierce (a little) the mystery.

Hubert Lenoir has always wanted to keep his personal life as far away from the spotlight as possible. Even if he is a beast in front of a crowd – “I feel like I was maybe a little born to do this” – the songwriter wants to go unnoticed in his everyday life. .

“I am quite private in nature, he told the Journal. I try to grow my beard so I don't get recognized [laughs]. Sometimes it can get a bit overwhelming. I'm tired of wearing caps, hoods.”

That's kind of why he plans to go abroad for several months next year.

“I'm hesitating between Miami, Paris or Italy,” he says. he. I would go write, live, live, exist elsewhere.”

When we dare to speak of the “Hubert Lenoir character”, the musician , born Hubert Chiasson in Quebec in 1994, stands up and says he already had difficulty with this term a few years ago.

“We were talking about a character, when it was real stuff that I felt deep inside me. If I put on a dress or makeup, it was already something I did in my life before. It cost me a lot in my life to come to terms with who I was. So, to be told that he's a character, it's like coming to invalidate who I am as a person.

While some of his escapades have caused a lot of talk in the past – just think of the Félix he put in his mouth at the ADISQ gala or at a ass he had shown to La Voix–, Hubert Lenoir also rejects the qualifier “provocative”.

“It’s as if I was constantly asking myself what my next provocation is, he says. It's more of a desire to make myself laugh by giving a damn about the consequences. It's not necessarily calculated.”

Very sensitive in his personal life – “I always want to cry these days, I have easy tears” – Hubert Lenoir mentions finding it often practical to have a strange image with a certain audience.

“When I go to the grocery store, for example, there are ladies who recognize me. But they think I'm like evil or satanist! It makes people shout for patience. It's like a kind of distance arm.”

At only 28 years old, Hubert Lenoir has a career start for the least dazzling. What are his dreams for the next few years?

“There are a lot of things I want to do,” he replies. There are plenty of artists in France, including childhood idols, who write to me and want to work with me. I can't wait to see what I can do. I'm in the same situation I was in when Darlene ended. What's coming? There are so many opportunities. I probably have five or six album ideas. I just have to choose which one I work on first.”

“I will try to manage this. At the same time, I feel that due to my unorthodox way of working and making music, I often face certain challenges. I have quite a different work process. It's not always easy, it's not always the smoothest thing, but I think it pays off after that. I would really like to see where all this can take me.”

Nominated 11 times at the 2022 ADISQ galas this year, Hubert Lenoir could well live the consecration with his excellent project PICTURA DE IPSE: Direct music. But the songwriter prefers not to think too much about the number of statuettes he could collect.

This time around, despite earning four more nominations with his second album, the songwriter views the 2022 gala no differently.

“I try not to make me expectant about what I might win or not. It's such a subjective thing. But let's say that night, the second I'm nominated [as a category finalist], that's the thing I want most in the world.”

Stressed out about nature

In the Wilfrid-Pelletier room, Sunday evening, he will surely not be very zen. “I'm naturally stressed. I watch a movie in the afternoon on TVA and I'm stressed to see what will happen with the person on the screen! My nervous system works very strong. »

In his young career, Hubert Lenoir says he has already won five trophies at different ceremonies. After having navigated between his office, the parents of his accomplice Noémie D. Leclerc and his own parents, four trophies have now returned to his home, to his living room. The fifth – the Félix for song of the year in 2018 for Fille de personne II – has been with its co-director, Alexandre Martel (Anatole) “for a wicked end”.

“At least it's not like I'm saying I don't know where my trophies are. I could never [lose them]. I take too much care of my things.”

More than a year after the release of his second album, the acclaimed PICTURA DE IPSE: Direct Music, Hubert Lenoir continues to reap the benefits.

“This album has a long life, he remarks. The reception was really cool from the first week. But I have the impression that it is becoming more and more important.”

When he had the idea of ​​drawing inspiration from direct music for his new disc, a concept that was audacious to say the least , Hubert Lenoir never doubted.

“I was very confident when I started working with this direct recording technique,” he says. I need some kind of fuel that drives me to work. […] I never doubted the spark that made me want to make this album.

“It's still experimentation, continues -he. I didn't know if people were going to find it cool or just love the music and not dwell too much [on the concept]. But I never doubted the process.”

Tip of the iceberg

Even though he had control over just about every element of the project, the artist from Quebec did not hesitate to call on several collaborators to support him.

“If you look at the credits [of the album], there are a lot of people who worked on it. It's an album that is extremely collaborative.”

Released on September 15, 2021, PICTURA DE IPSE received very rave reviews in several media (we gave it a rating four and a half out of five stars). Despite this very positive reception, Hubert Lenoir is far from wanting to rest on his laurels for the future.

“For me, Darlène and PICTURA DE IPSE is just the tip of the iceberg of what I try to aim for in my artistic life, he says. I think I'm not at my full potential yet. I would like to become better.”