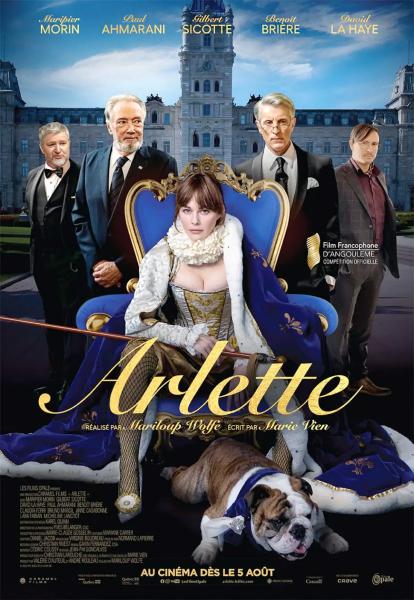 Mariloup Wolfe's Arlette film is tailor-made for controversy. Maripier Morin, still dragging in his bag his past sexual misconduct towards Safia Nolin, plays the main role.

She plays Arlette Saint-Amour, a fashion journalist catapulted into politics by the Prime Minister who, to “rejuvenate” the worn image of his government, named her “star” Minister of Culture.

He also used it as a weapon of massive political seduction to neutralize his almighty Minister of Finance, narcissistic parrot of the business community whose ambition is to succeed the Prime Minister soon.

The choice of Maripier Morin will shock many, empathy being due to his victim. Nevertheless, I wanted to see the film above all for its subject and its purpose. I was curious about it as a political analyst and also, in another life, as a former adviser to the Prime Minister.

Shot inside the National Assembly and scripted by Marie Vien, former attaché of the press of the former Minister of Culture, Liza Frulla, Arlette, I am convinced, is certainly worth the detour.

Without having the cruel refinement of a Denys Arcand in Le Confort et l'indifférence or the daring onirism of a Luc Dionne in Bunker, le cirque, Arlette is nonetheless a political fable of demanding complexity.

The image of power

It deals with the power of the image in politics, and in doing so, of the image of power. The unequal place of women, despite real progress. Political, but often fiercely interpersonal power struggles.

It defends the crucial importance of culture and its artisans, yet the eternal poor relations of government budgets. It openly names neo-liberalism as responsible for the long massacre in our education and health networks.

For anyone who has spawned at the top of the Quebec political pyramid, we also recognize some classic character traits some chiefs of staff, press attachés, deputy ministers, journalists, etc.

It even shows the compensations which, well beyond their salaries, which are lower than those of any CEO, nevertheless soften the “crazy life” of the ministers and the prime minister. Including their access to the best wines, best restaurants, best hotels, etc.

Paradoxically, Arletteis also a story of redemption and hope. Of hope in politics and the people who, when it does, choose it as an agent of positive change. In this, the moral of Arlette's fable comes in three stages.

Firstly, there are battles that are worth fighting right down to the “court of Versailles” – a metaphor in Arlette for the supreme power held by any prime minister in our parliamentary system.

Two, it happens to see “star” recruits show that they are quite capable of doing so, on the condition, however, of having the support of the Prime Minister. Third, the image in politics, as in life, is often misleading.

In short, as the late Jacques Parizeau said so well: “It's sad, politics as a profession, with its interpersonal relationships complicated. I used to say it was an “ocean of toes”. But if you want to change things, it's inevitable, you have to do politics. »