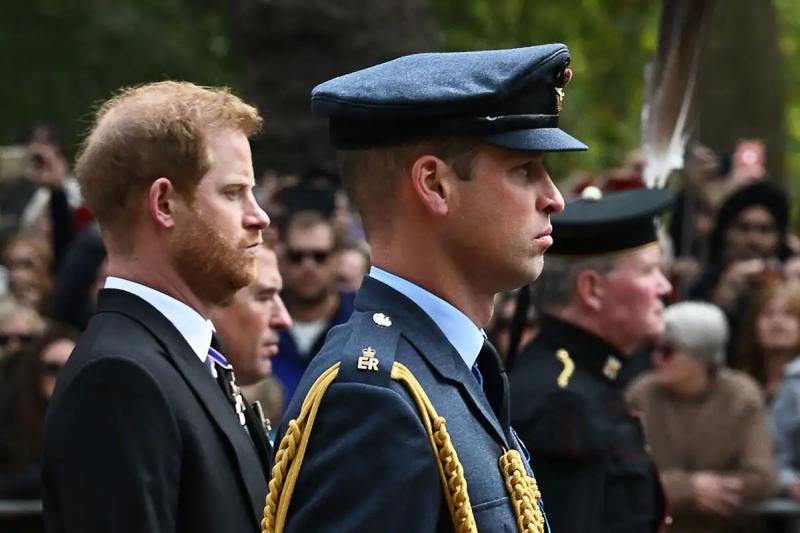 Reputedly cold-blooded Princes William and Harry walked side by side behind the coffin of their grandmother Elizabeth II on Monday at her funeral, solemn but with no sign of emotion or reconciliation.< /strong>

To the sound of bagpipes, they paraded behind their father the new King Charles III, their uncles Andrew and Edward and their aunt Anne, from Westminster Hall to Westminster Abbey , then, after the religious ceremony attended by dignitaries from all over the world, to Hyde Park from where the coffin left for Windsor Castle in a royal hearse.

25 years ago, the images showing the two brothers aged 12 and 15 walking together headlong behind the coffin of their mother Diana moved the entire planet.

Monday, William, to whom his father Charles III passed on the title of Prince of Wales, wore his military uniform, like his father Prince Edward and his aunt Princess Anne. Like them, he several times gave the military salute in the direction of his grandmother and sovereign, while his brother abstained.

Leaving the royal family with a bang in 2020, Harry, who lives in California with his wife Meghan and their two children, lost the right to wear his uniform and was dressed in a black frock coat, however decorated with his medals.

Tensions or protocol? William's wife Kate arrived at Westminster Abbey accompanied by her children Prince George, 9, and Princess Charlotte, 7, with Meghan at their side. But there again without exchanging a look or gesture that could suggest a rapprochement between the “fantastic four”, as the British press had nicknamed them before their estrangement consumed after the departure of Harry and Meghan in California.

William, now heir to the Crown, Kate and their two eldest (Louis, 4, was absent) settled in the front row for the religious ceremony. Harry and Meghan were in second place.

Before the death of Elizabeth II, the two couples had not been seen together in public for more than two years, with the exception of the religious ceremony for her 70 years of reign last June. They had not exchanged a glance then.

Last week, the quartet had created the surprise by going to admire the flowers placed in front of Windsor Castle in tribute to the Queen.

They had then left in the same car, but the faces were closed, the minimal interactions.

William and Harry also participated in a funeral wake for the eight grandchildren of 'Elizabeth II around the coffin of the very popular sovereign, who died on September 8 at the age of 96 after more than 70 years of reign.

Prince Harry, who also bears the title of Duke of Sussex, prepares the release of her memoir which could once again strain relations between the two couples, after a shock interview by star American presenter Oprah Winfrey last year, where Harry and Meghan accused an unidentified member of the royal family of racism in towards them.