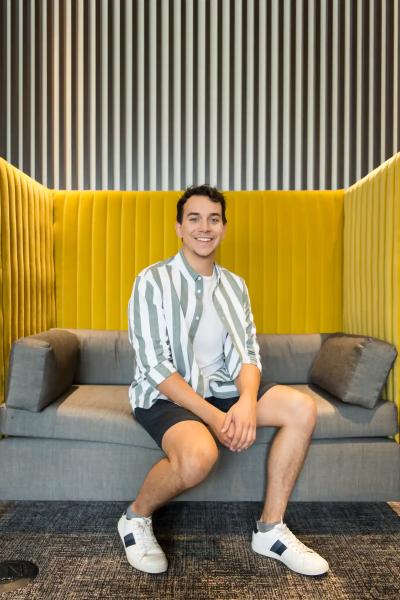 William Cloutier is on cinema screens from Friday. Why? Because he dubs the voice of the crocodile in the children's movie “Lyle the Crocodile”.

“One fine day, I received an email inviting me to do the dubbing for the film. The team had thought of me because my voice corresponds well to that of Shawn Mendes and that flattered me. Suddenly, it made me want to take up this challenge,” William Cloutier, who is in Paris where he is working on a secret project, told the QMI Agency.

A graduate in theatrical interpretation and having lent his voice to the film “Scary Stories to Tell in the Dark”, William Cloutier was familiar with dubbing and acting. But dubbing songs turned out to be a whole other ballgame. Because, in “Lyle, the crocodile”, the animal in question lives in the attic of a New York family and cannot speak, it only expresses itself in music.

“It's rather unusual to see a crocodile sing and I admit it wasn't always obvious. We found a strategy with Pierre Bédard, the dubbing director at Difuze, in Montreal, to sing without losing the meaning of the lyrics of the songs.”

No, William Cloutier did not have the time to rehearse the musical pieces before the dubbing. “The same morning, I was invited to view the sung passages so that I could get an idea of ​​the intentions. In the afternoon, we started with the titles. I started and we went sentence by sentence. All the songs are built like that. Afterwards, we listen to the whole thing again because we don't want a “quilt” finish.”

This singing dubbing experience, which he describes as “beautiful vertigo”, would not have been possible without his passage – and his victory – in the famous reality show in 2021. ““Star Académie” forged me to accept the fact to get started without necessarily being 100% ready. Sometimes there is something magical that happens, this feeling of accepting surprises, of discovering yourself through it. At “Star Académie”, I did a lot of things for the first time and there is a certain naivety in getting started like that. It was useful to me at “Star Académie” and I try to apply it in the majority of my projects. You learn to appreciate the fact of putting yourself in a little danger, but always with your tools and your bearings.”

William Cloutier was also sensitive to the messages conveyed by “Lyle, the crocodile”. “I really liked the idea of ​​this crocodile bringing out the best in each member of the family. What I also find interesting with the character of Hector [Editor’s note: the magician, “owner” of Lyle and who wishes to use him in his shows], is to want to use someone for his own ends. It joins my generation and it is a social phenomenon. When Hector wants to use Lyle's talent, you realize that it's no use.”

“I'm glad to see that even my children have noticed it.” Because the two toddlers were able to hear the performance of their father with great happiness. “Yes, they recognized my voice, even my 18-month-old baby.”