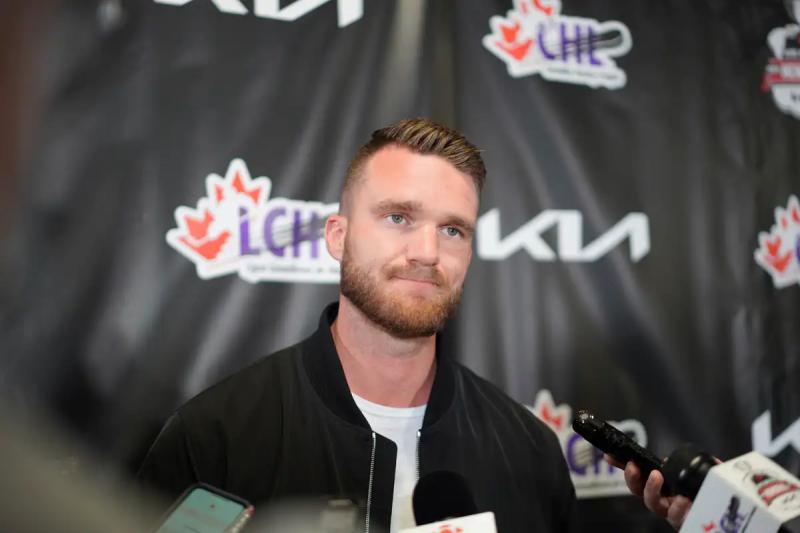 Jonathan Huberdeau was all smiles on Saturday as he took part in a ball hockey game with some ATP players. We can very well understand that.

The last two weeks for the Quebec striker have been eventful. First, he was traded by the Florida Panthers to the Calgary Flames in exchange for several players, including forward Matthew Tkatchuk.

A trade that took everyone by surprise.

Then, on Friday, he agreed to an eight-year, $84 million contract extension with the Flames.

“ It's part of life, said Jonathan Huberdeau who had a Flames jersey on his back despite the searing heat on the court.

“I was in shock after the trade. I told myself that I had to move on in life. For me, it was important to sign a contract extension to know where I was going in the next few years.

“I think I fit well with the Flames. I will play for a team that wants to have me in its ranks. Negotiations were easy.”

Before putting his signature on such an important contract, the director-general of Flames, Brad Treliving, came to meet Huberdeau in Quebec.

A two-hour meeting between the two men which was decisive for the future.

“It was a dinner to get to know each other better. Before signing a player to an eight-year contract, you have to meet him. We did not talk about a contract together. It was between him and my agent.”

“It was more to discuss the philosophy of the Flames and the fact that he wants to win next season.”

Huberdeau is well aware that this new contract comes with some pressure on him. In addition, the Calgary market is not that of Sunrise where hockey is often secondary.

“I cannot comment on this aspect before experiencing it, added Huberdeau. I have never played in a Canadian market before. Of course there will be a little more pressure, but I think I'll be able to manage it.”

Due to his move to Canada, the Quebecer will have to part with its magnificent luxury cars. It will therefore start afresh at all levels.

For the rest, he has already circled the date of his return to Florida: November 19.

“I can't wait to go and I'm sure it will be emotional.”

In another vein, the National Bank Open, in collaboration with Knapper, organized a ball hockey match between Quebec hockey players and a few brave ATP players.

Tommy Paul, Alex Molcan, Hubert Hurkacz and Casper Ruud were part of the men's tour team. On the side, we found in particular Huberbeau, Jonathan Drouin, Marc-Édouard Vlasic and Mélodie Daoust.

Under a blazing sun, the hockey players had the upper hand, but they were in their element.

“At first, they were confident they could beat us,” Drouin said with a smile. In ball hockey, I didn't think that was going to happen. They put on a good show.

“It's fun to participate in an event that brings together two different sports.”