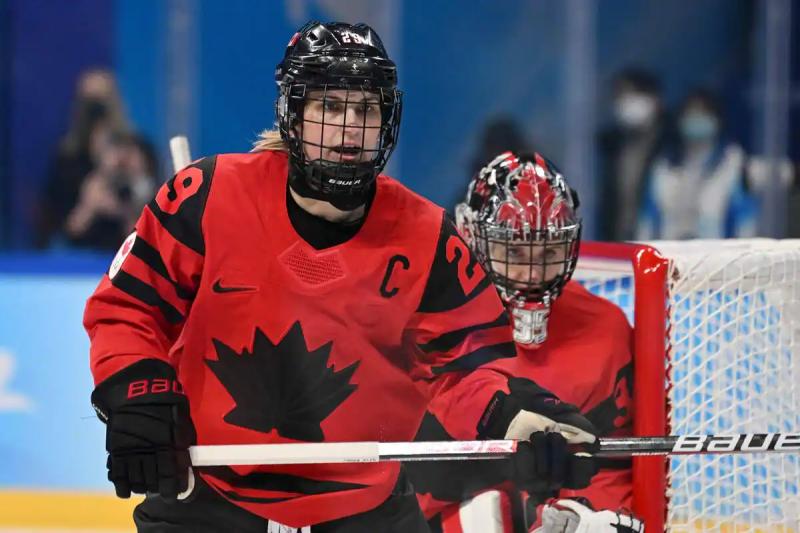 To win gold at the World Women's Hockey Championship, Canada had to muzzle a revving American offensive machine. The task was colossal, but the maple leaf players can say “mission accomplished”.

The Americans have outrageously outplayed some of their opponents in this tournament, throwing at least 57 shots against Japan, Finland, Switzerland and Hungary. Troy Ryan's team was not spared, being beaten 5-2 in the preliminary round, thanks in particular to the 33 shots of the winners.

Thus, the objective was clear for the final: to prevent the puck to get to the net. The plan worked as Ann-Renée Desbiens was only the target of 21 pucks in Sunday's 2-1 victory in Herning, Denmark.

“The United States did not manage to shoot as much as they would have liked and as they have done before in the tournament, analyzed Danièle Sauvageau on Monday. We blocked shots from them, and when they managed to get to Ann-Renée Desbiens, she was remarkable.”

In the eyes of the woman who led the Canadian team to the gold medal at the Olympic Games in Salt Lake City in 2002, this victory is also due to the resilience and adaptability of the players.< /p>

Indeed, the World Cup did not take place during the Olympic years before. But the International Ice Hockey Federation (IIHF) changed the situation at a congress in 2021, so that the two events will coexist in the future.

“The Canadians had made good progress during the week, pointed out Ms. Sauvageau. Following the Olympic Games, they were very much in demand. They had less time than usual to do what is called the transition period and then the general preparation.”

Anyway, the experience was decisive for the Canadians in the most important moments. And the youngest were there to drink it.

“The last shot of the game was blocked by none other than Marie-Philip Poulin,” Ms. Sauvageau aptly pointed out. The veterans continued to progress and played with magic when it mattered most. And the youngest, who had been set aside last year for the Olympics, have managed to take their place. […] When you look at young people, I think that Canada has nothing to envy anyone.”

Parity: a question of means

Without rebelling, Danièle Sauvageau does not hide that she is tired of being questioned about the lack of parity on the world stage of women's hockey, while calling for continued efforts to grow women's hockey.

Once again, Canada and the United States took the lead on the world stage in an important meeting. Along with World Championships and Olympics, the two countries have met 26 times in 28 finals since 1990.

This dominance is due to the resources deployed and the development structure that allows players to continue playing hockey after school. Indeed, still too few players can take advantage of infrastructures like those available in North America, and a select few can claim to earn a living thanks to their prowess on the ice.

“Imagine a player of 23 years old drafted in the National League, but which has no structure to develop and no salary, imagined Ms. Sauvageau on Monday. Would he continue to play? The answer is no. I think those are the real questions, and of course the real answers.”

Never mind, it's not up to Canadians to slow down. And for those who say that the lack of parity harms the show, Ms. Sauvageau believes that the essential lies beyond the show. According to her, it is rather the feeling of pride that this Canadian victory should inspire.

“I feel like a broken record, launched Ms. Sauvageau. Has Serena Williams been asked to slow down? I was watching Formula 1 from afar at the weekend. It's always two, three, four drivers [who fight for victory]. So there, we have two pilots: the United States and Canada. It's the best of women's hockey. We must be proud of it, support it and continue to support it.”

A training World Cup for everyone, even the referees

The Americans have accused their rivals from the North to dive during the final of the Women's World Hockey. These are declarations of good war reflecting the intensity of the rivalry, in the eyes of Danièle Sauvageau.

Striker Abby Roque had been scathing after the loss. “I believe that several members of their team play comedy. I find it ridiculous,” she said bitterly on Sunday, according to the Sportsnet channel.

Without condoning these kinds of allegations, the boss of Center 21.02 in Montreal believes that the feeling of injustice is becoming inevitable when the referees gauge their level of tolerance to the stakes of the game.

“The officials have decided to let play as they had done in the first game, noted Ms. Sauvageau on Monday. From the moment you let things go and there is an infraction that is called, everything becomes moot on both sides.”

< p>The refereeing may not have been perfect, but just like the players, the women wearing the striped uniform must also have the chance to play on the most beautiful stages in order to progress. Elizabeth Mantha notably had it before breaking the glass ceiling in other circuits such as the American Hockey League (AHL).

“Me, what I may have blamed on the referees is to whistle too quickly with the puck in play, launched Ms. Sauvageau. But it's a question of positioning and habits.”

“We have to make sure that these women who are involved in refereeing are also exposed at the highest possible level. As we see here in Canada, like the Elizabeth Manthas of this world who have refereed Laval Rocket games,” said Ms. Sauvageau.