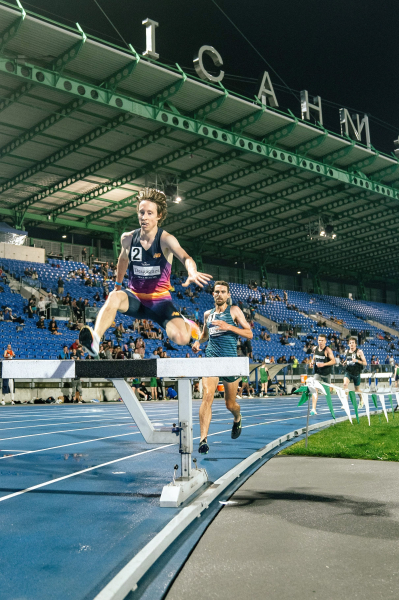 For a baptism of fire at the World Athletics Championships, that's quite a thing! As he approaches his first steps in the biggest annual world competition in his sport, Jean-Simon Desgagnés says he is excited at the idea of ​​experiencing this great moment at the legendary Hayward Field, in Eugene, Oregon.

The 3000 m steeplechase specialist will be in action on Friday in one of three waves of semi-finals in the stadium which was born in 1919, before being destroyed and rebuilt on the same site, in  2018.

“It seems like I realized when I woke up that this isn't going to be a normal week. I'm excited and I'm enjoying it 100% “, he said Tuesday afternoon
before the big departure at Jean-Lesage airport in Quebec City.

“It's still exceptional. In the industry, we call it “tracktown” because it's where all the athletics happens. We are going to reside on the campus of the University of Oregon, which still has a big athletics team. The stadium is legendary in the field of athletics. It's not the glamor of Europe, but it's the perfect location for my world premieres. ”

Like any athlete who is in his world debut, Desgagnés is discreet about his goals. With lip service, he admits that a presence in the final makes him dream.

The 23-year-old student-athlete, who made his mark with the Rouge et Or, nevertheless remains realistic in his expectations. Only the top three finishers in each wave of 15 riders, along with the other six best times, will be invited to Monday's final.

“The mission is really to gain experience and compete against the best in the world. I have to get there feeling like I belong. I placed like everyone else and I'm part of the elite.

“ I'm going to start and you never know, with a magical day, anything can happen. In the back of my head, there is the dream of making it to the final, but of the 45 who start, only 15 make it. It’s a very big mandate,” he conceded.

Especially since it is the crème de la crème that will be gathered on campus.

“We are talking about the elite. In terms of depth and strength, it's comparable to the Olympics. It will certainly be strong, “he recalled, taking care to specify that he will feel good in his place. “I'm happy to be around these big stars and it will be good for my career, but I'm not going to be intimidated.”

After setting a personal best on May 24 in New York (8 min 22.95 s), Desgagnés subsequently maintained stable times, which encouraged him a few days before the big event

Desgagnés will be part of a delegation of seven Quebecers on the Canadian team, the second largest to date at the World Athletics Championships.

“ It's extremely gratifying to see where athletics in Quebec is going. We see that the next generation is there. The majority of our athletes are relatively young and will be around for many years.