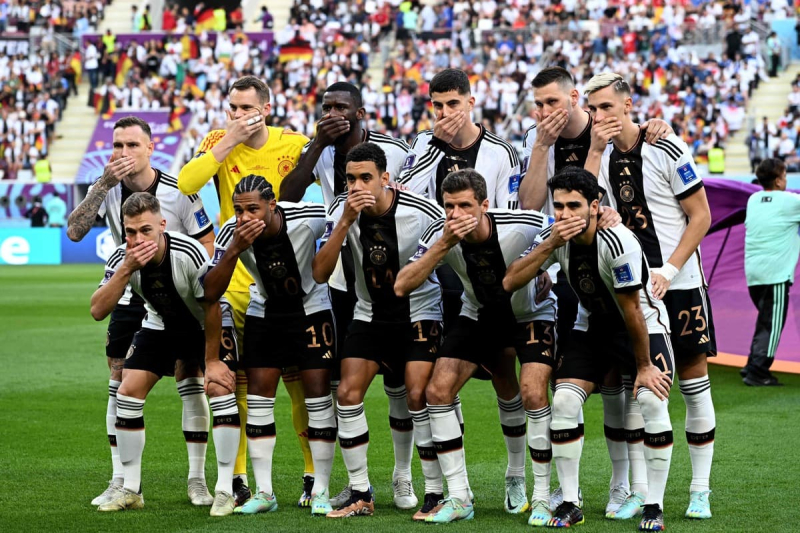 While Germany expressed their deep disapproval of FIFA's decision to ban the wearing of the inclusion armband at the Soccer World Cup, the Canadian team remained silent before Wednesday's duel against Belgium.

Human rights, and more particularly those of LGBTQ+ people, are a sensitive subject on the sidelines of the tournament taking place in Qatar, a country where sexual relations outside marriage and homosexuality, in particular, are liable to criminal prosecution.

If Canada did not publicly show any dissatisfaction about this, the German delegation did not seem impressed by the president of the international federation, Gianni Infantino, who had asked the participating teams not to wear the “One Love” banner. , while threatening the refractory with sanctions.

Under the eyes of the big boss of FIFA, the German players – including captain Manuel Neuer – presented themselves on the ground before their duel against Japan and made a sign evoking censorship by placing their hand on the mouth at the time of the traditional team photo before kick-off. The coup was planned and moreover, the commentators of the ARD channel warned viewers that an important action was going to be committed.

For her part, the Minister of the Interior responsible for sports, Nancy Faeser, seated just to the left of Infantino, donned the famous inclusive armband before posting a photo on social media and donning a jacket covering the headband.

“Human rights are non-negotiable,” the German soccer federation said in a statement. Forbidding us to wear the armband is forbidding us to speak. Our position is clear.”

In Germany, many wanted to see the Mannschaft players not give in to the instance of world soccer. Supermarket chain REWE has indicated that it no longer wants to extend its partnership with Mannschaft after the decision not to wear the “One Love” armband.

In addition to Neuer, who was forced to wear a FIFA headband with less demanding messages, six other captains – those of Belgium, Denmark, Switzerland, Netherlands, England and Wales – wanted to place the famous armband on them.

So Dutch midfielder Davy Klaassen congratulated the German players. “Germany expressed itself beautifully, in a catchy and original way, he judged at a press conference. It's a good way to do it.”

In Canada, the Trudeau government has been more incisive with FIFA than the players in Qatar. House of Commons elected officials this week unanimously condemned FIFA for its decision to ban the 'One Love' armband. Displaying the colors of the rainbow, the banner promotes the rights of LGBTQ+ people in the host country of the World Cup.