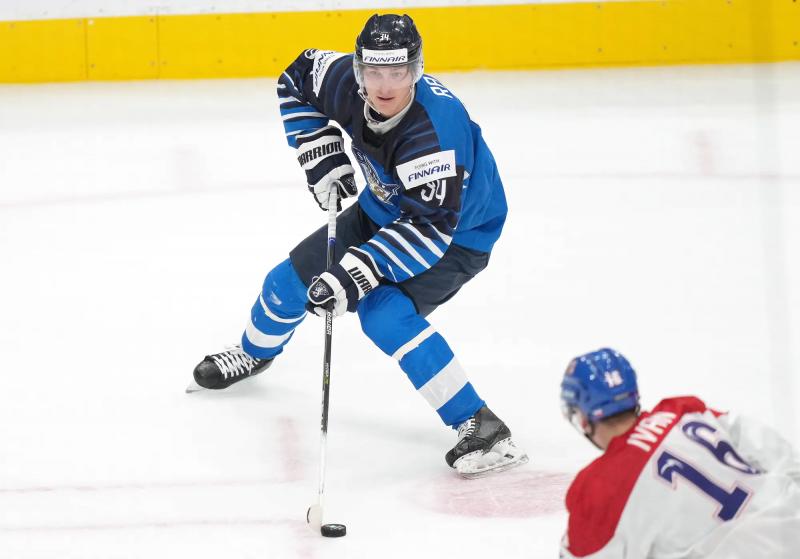 EDMONTON | Aatu Räty is definitely using the World Junior Hockey Championship to prove he's a much better player than this which had been conveyed during his draft year, in 2020-2021.

After three games, he is the forward who comes closest to Mason McTavish and the top scorer of the competition. The New York Islanders prospect added three points to his record today in a 9-3 win over Slovakia to bring his total to eight since the start of the competition, two shy of McTavish.

It's a good thing since Canada and Finland will meet tonight in a match that will determine first place in Group A!

But in the case of Räty (pronounced Ratou), although we can make the statistics say what we want, we have to admit that his offensive production after three games is representative of the way he has played so far.

Fast, intense and involved in all game situations, he was without a doubt one of the Finns' most threatening players in their first three games.

“I'm happy with my game. conceded no goals and we scored several. The team is winning, so I like that,” he said humbly after today's match, when asked if he was happy with his game so far.

His trio partners, Joakim Kemell and Roni Hirvonen, however, were more complimentary to him.

“He's a great skater and he has a good vision of the game. He's very intelligent,” first complimented Kemell, who is just behind Räty in the tournament scoring column, with seven points.

“He's so good,” added team captain Hirvonen. He has improved his skating a lot. He's such a talented player, he spots me every time on the ice when I'm discovered. »

The name Räty may be familiar to you and, if not, we'll give you a summary.

Before the start of the 2020-2021 season, many saw the center player Finn as the top prospect for the NHL Draft. However, a season that fell short of expectations caused his star to fade to such an extent that he finally had to wait until midway through the second round, ranked 52nd, to hear his name spoken by the New York Islanders. .

This choice could ultimately smile on the Islanders since Räty bounced back in a good way last year.

After a slow start with Kärpät in Liiga, he was transferred to the Jökerit formation where he exploded by scoring 40 points in 41 games.

The Islanders then brought him to Bridgeport where he was able to play two regular season games with the Islanders' farm club, then six in playoffs.

“I think confidence is really key for me. In my draft year, I played an average of ten minutes per game while last year, I spent almost 20 minutes on the ice every night in addition to playing on the advantage and the disadvantage. These are things that help build confidence in your abilities. »

Aatu Räty is not the only architect of his success since the start of the competition. His line with Kemell and Hirvonen is one of the best in the tournament so far.

“We're different players and we complement each other well,” Kemell said. I'm the scorekeeper, and Aatu and Roni like to prepare plays. They are still trying to find the pass line for me. Our trio works very well. »

It would therefore not be surprising if, tonight, this trio is opposed to that of McTavish, with Connor Bedard and Brennan Othmann.

A challenge that pleases Räty, who didn't know he came within two points of the Canadian captain after today's game.

“However, I know very well that it is he who is at the top! Everything he does, he does well. He played in the NHL last year and it shows. He can score and pass. I can't wait to meet him. »

Finns have no qualms about facing Canada tonight in a game which will determine the first position of group A.

“At the moment, we are at the same level as them and we have the confidence to be able to beat them. It will be an interesting game,” Finnish head coach Antti Pennanen said today.

“It will be a tough game,” added striker Joakim Kemell. Since their first game against Latvia, they have been playing really better. I saw five or six periods of them and they were very good. They have a lot of talent, but I think we will be a tough opponent. We play well in possession of the puck as well as in defence. Clearly, we will be their biggest test so far. »

For Kemell, a first-round pick of the Nashville Predators in the last draft, it will be important to play a style of play based on involvement against the Canadian team.

“Our mentality is simple: we want to be better than them. I think it will start with the physical aspect. We will have to win the physical part of the match, then take advantage of our chances of scoring. »

It has to be said that Canada and Finland have had a similar journey so far.

Both teams have won all three of their games so far in the tournament, but only a small point separates them in the standings as the Finns beat the Czechs in a penalty shootout in their second meeting of the competition, giving them two standings points rather than three.

The Finns scored a total of 19 goals and conceded seven, compared to 21 goals for Canada and four against.

“The difference between the two teams is that they know each other, noted Canadian assistant coach Louis Robitaille. They played a lot of hockey together and they had friendlies against the Czechs before coming here. They have this chemistry installed while we grow every day. We are progressing, and it will be two good teams that will face each other tomorrow. »