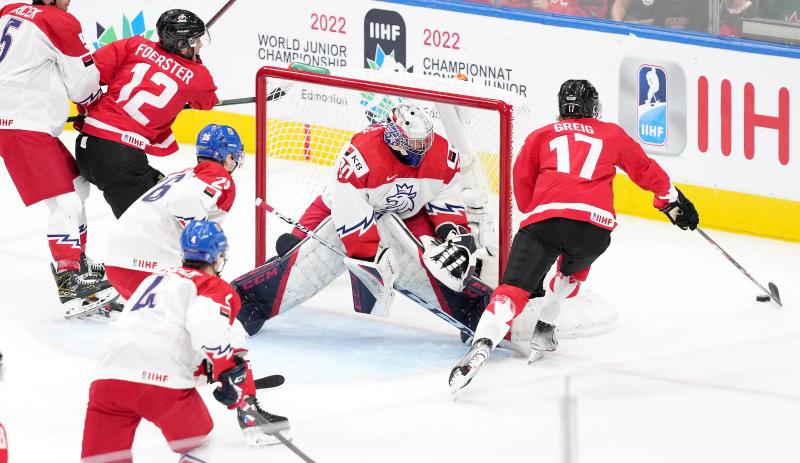 EDMONTON | Injured Wednesday night against Switzerland, center Ridly Greig was not on the ice Thursday during practice. Junior Team Canada on the eve of the semi-final game against the Czechs. If ECJ was unable to provide an update on his health status, one thing was clear: his absence would cause a complete shake-up of the team's roster.

Greig injured his left arm in the first period of the quarter-final match when he was hit by Vincent Despont of Switzerland. In the end, Greig's condition will be the domino that will knock everyone else down heading into Friday's game.

As of Thursday, the odds were not in favor of presence of the No 17 in the Canadian line-up for Friday afternoon's game, 4 p.m., against the Czechs.

That's why in training on Thursday, only the team's second line, consisting of Kent Johnson, Tyson Foerster and Logan Stankoven, remained intact. Mason McTavish was flanked by Joshua Roy and William Dufour while Connor Bedard played on the third line with Nathan Gaucher in the center and Will Cuylle on the left.

“Ridly has probably been our most consistent player since the start of the tournament. He plays in all situations,” admitted head coach Dave Cameron on Thursday.

Ridly Greig in the Belleville Senators uniform, in February 2021.

Certainly, Greig's absence would provide Roy and Dufour with another golden opportunity to play a prominent role in the team's success, being paired with whoever is likely the player of the tournament in Mason McTavish.

“Dave met with us before practice to tell us that our role would still be to face the best lines on the other side,” Roy said. With McTavish, we should be able to produce a lot of offense as well. »

Certainly, by being placed with the captain, the two Quebecers will be called upon to create things in attack. For assistant coach Louis Robitaille, it will not be far from the role they had with Greig as center player.

“A lot of people say it’s a defensive trio. At the same time, the defense starts in possession of the puck. If you have the puck and you play on 200 feet, you put a good forecheck, it will be hard to play against them. That's what they do and they're aware of their defense when they're on the ice. The fact that they are responsible along the boards and in their decision-making makes it easy to put them against the big lines. On the other hand, to say that it is a purely defensive trio, we would be wrong. Their line was producing hugely at five-on-five with Ridly, so we expect the same with Mason tomorrow. »

That being said, whether with or without Ridly Greig, Junior Team Canada will hit the ice at 4 p.m. quarter-finals.

In the first meeting between the two teams, during the preliminary round, the Canadians made short work of the Czechs by a score of 5 to 1, dominating them also 57-23 in the penalty shootout column.

“I think we're going to face the same kind of team, a team that works hard. If we play like we played against them in the first match, it will be fine. […] Against Switzerland, we did not play our best match. It's like our mulligan, if we can say it like that, and we'll be ready,” said William Dufour.