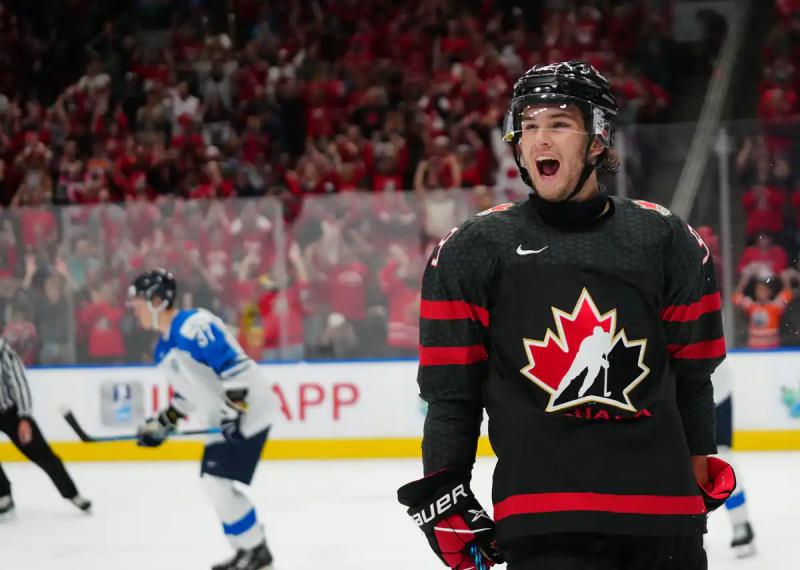 Canada won gold at the World Junior Hockey Championship on Saturday at Rogers Place in Edmonton with a 3-2 overtime victory over Finland.

Kent Johnson played the heroes following a magnificent two-on-one climb with Logan Stankoven. Goalkeeper Juha Jatkola, who played an inspired game, fended off the first attempt but was helpless on the return shot.

The Finns came within a hair's breadth of claiming victory early in overtime – a three-on-three game – but captain Mason McTavish prevented the puck from flying over the red line.

Finland sold their skin dearly, closing a two-goal deficit in the third period. Propelled by a spectacular save from Jatkola's mitt at the expense of Tyson Foerster, the visitors showed their teeth during this period.

Aleksi Heimosalmi first allowed his team to register thanks to to an accurate point shot. Goalkeeper Dylan Garand saw nothing but fire, while his view was obscured by a cluster of players in front of the net.

Then, the tournament's second leading scorer, Joakim Kemell, silenced the home of the Edmonton Oilers by threading the needle on a one-timer. He took advantage of a perfect pass from Toronto Maple Leafs prospect Topi Niemela to tie the game, with just under 10 minutes left on the clock.

The maple leaf completely dominated its rival during the first 20 minutes of play. It took more than half a period for the Finns to fire a first shot on target.

It is thanks to the successes of two Quebecers that Canada had awarded itself a cushion of two goals.

The jewel of the Montreal Canadiens Joshua Roy first smelled a sequence where McTavish rounded the net, and the puck landed on his backhand at the mouth of the net. The Sherbrooke Phoenix point guard completed his tournament with four goals and nine points in eight games.

Then, at the start of the middle period, William Dufour doubled the lead of the “Maple Leaf”. He skilfully handled the disc in front of the opposing defender before firing a hard shot below Jatkola's blocker.