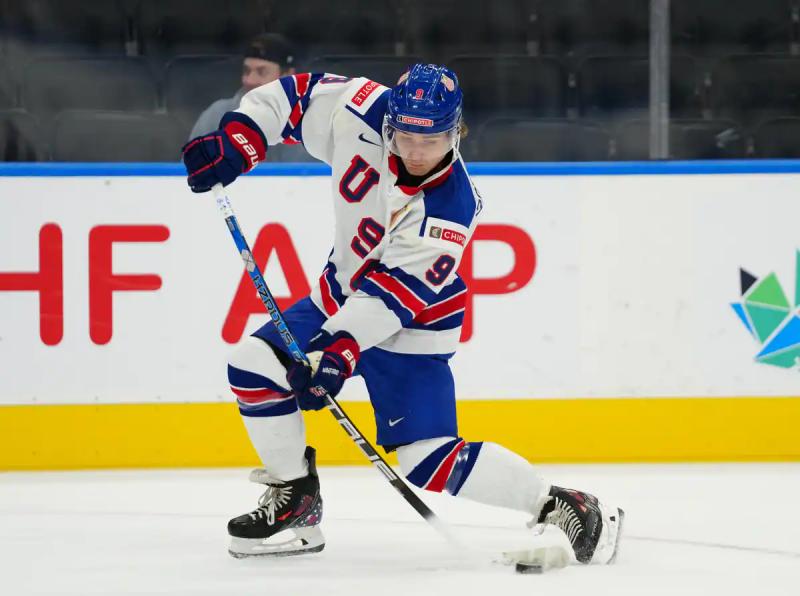 EDMONTON | There's probably not a player happier to be at the World Junior Hockey Championship in Edmonton than forward Thomas Bordeleau.

The Texas-born Quebecer has finally donned the United States jersey for its first two games of the tournament, more than a year and a half after a series of bad luck deprived it of two appearances in the event.

In December 2020, Bordeleau was dropped from the national team a few days before the start of the tournament because he had been in contact with a teammate who had contracted COVID-19. Being considered a close contact then, he must have watched the United States win the gold medal in his living room. Then last December, it was he who caught the virus before the start of the competition, again forcing him to withdraw.

But, in the end, COVID-19 will have somehow made amends to the San Jose Sharks prospect. The growing number of cases at the last tournament had forced the organization to cancel the event and postpone it to this summer.

On Tuesday, he finally played his first match.

“It's been such a long process to get here. There were so many practices: it was my third camp for the World Juniors. Just getting here, playing a real game that matters, it felt good,” admitted the Quebecer, who has four points in two games in the tournament so far.

“He is hungry, added the American coach Nate Leaman. It's really nice to be around him and we see, both in training and in matches, how much he wants to be here. »

It has flowed, water under the bridges, between the disappointment of December, then the joy of finally represent his country in August, for Thomas Bordeleau.

After participating in the Frozen Four, the tournament bringing together the four best American university teams, with the Wolverines of Michigan, he made his professional debut, first with the Barracuda of San Jose, school club of the Sharks. Five days later, it was with the big club that he made his debut. He eventually played eight games in the big league, collecting five assists.

If, after the season, it seemed obvious in his head that he would participate in the World Juniors, the decision was not so easy to make. The many organizational changes at the Sharks over the summer, including the late hiring of a new general manager in Mike Grier, delayed the process.

“There have been so many moves that I think it was a little more complicated than for the others. The people who advised me before were no longer there when it was time to make the decision. However, the new management assured me to do what I wanted to do. »

Now that he's there, Bordeleau has only one goal in mind, and it's collective.

“ If I tell myself that I have to perform, that I have to finish the tournament with so many points, that I have to score, it will harm me. I know myself and I know it. I want to bring my experience here. My goal is to have fun trying to bring home a second straight gold medal for the United States. »

For coach Leaman, the experience Bordeleau has acquired over the past few months will only be beneficial in this other gold rush for the United States.

“He brings an internal calm. The speed of the game is not an issue for him because he played at that speed in the NHL. On the other hand, his experience of playing in great moments and important matches is what he brings to us. »

One thing is certain, if the United States wins gold, Bordeleau will not watch it on TV. He will be in the front row.