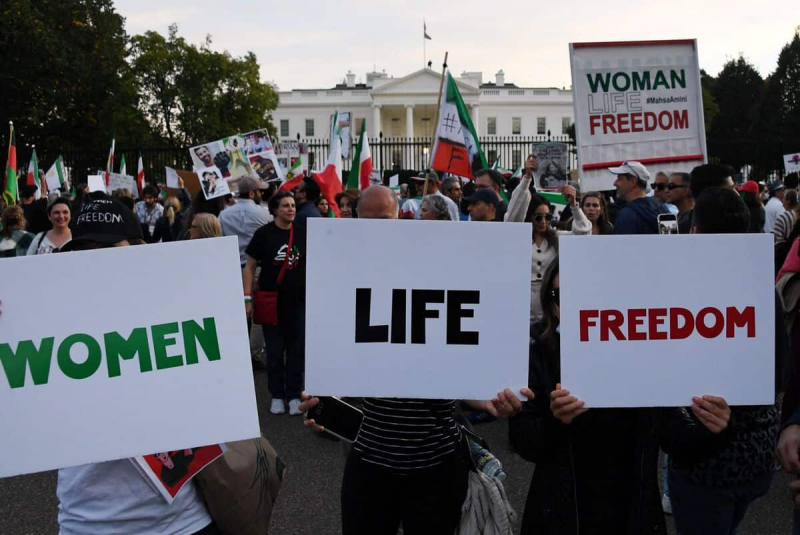 Worshippers, braving heightened security measures, gathered at the cemetery in Iranian Kurdistan where young Mahsa Amini is buried on Wednesday, to pay their respects at the end of the 40-day mourning period .

“Woman, life, freedom”, “Death to the dictator”, shouted dozens of men and women gathered in the Aichi cemetery of Saghez, the city of origin of Mahsa Amini in the province of Kurdistan, in the west of Iran, according to videos posted on social networks.

This 22-year-old Iranian Kurd died on September 16, three days after her arrest in Tehran, where she was visiting with her younger brother, by the morality police who accused her of having violated the strict dress code of the Islamic Republic, in particular imposing the wearing of the veil for women.

His death sparked a protest movement unprecedented for three years, which continues across Iran. Young women and schoolgirls are often on the front lines, many bareheaded, burning their veils and facing security forces.

Wednesday, the 40th day following the death of Mahsa Amini, marks the end of the period of traditional mourning in Iran.

According to human rights activists, the security forces warned the parents of the young woman against organizing any commemoration ceremony, in particular at her grave, going so far as to threaten “the life of their son”. /p>

Images posted online by the NGO Hengaw showed a massive presence of security forces in Saghez on Tuesday evening, the entrances to which were reportedly blocked.

Despite this, dozens of residents entered the town on Wednesday, walking through fields and along roads, in cars and on motorbikes, according to footage uploaded by Hengaw, a Kurdish rights group in Iran, based in Norway.

“Cemetery of the fascists”

“Kurdistan, Kurdistan, the cemetery of the fascists”, chanted one of the groups, in another video shared on Twitter by activists. AFP could not immediately verify the authenticity of these images.

According to this group, two figures of Iranian football, legendary striker Ali Daei and goalkeeper Hamed Lak, went to Saghez, “wishing to be present on the 40th day of mourning”.

The two men went down at the Kurd Hotel, according to Hengaw, but “were transferred to the government guesthouse (…) under the guard of security forces”.

Ali Daei had previously been harassed for statements online in support of the movement, and had his passport briefly confiscated.

The daily “Hammihan then quoted Kurdistan Governor Esmail Zarei Koosha assuring that Ali Daei and other celebrities were in Tehran and that “everything was calm in Saghez”.

Security forces' crackdown on protests that followed the death of Mahsa Amini across Iran has claimed at least 141 lives, including children, according to a new report revealed Tuesday by the IHR.

In addition, the city of Zahedan, in the province of Sistan-Baluchistan (southeast), one of the poorest in Iran, was affected by several days of violence sparked on September 30 during demonstrations against the rape of a young girl attributed to a policeman , which left at least 93 dead according to the same NGO.

Twenty-three children were killed in the repression, according to Amnesty In ternational, 29 according to the IHR.