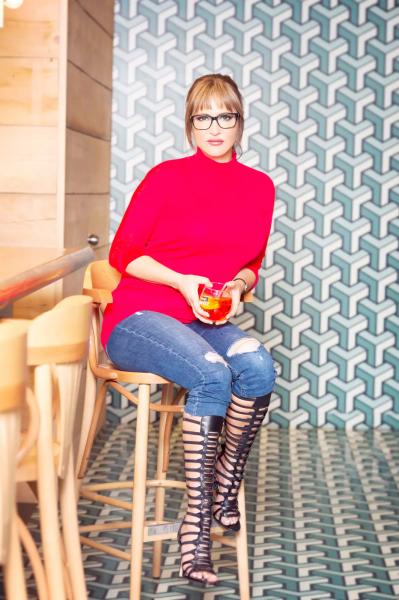 On page 69 (I swear I'm not making this up), we see AML in a chip shop, breasts in the air, eating poutine gravy that has been accidentally spilled on the breasts of a pretty topless girl.

The next page, she shares a fries greedily devoured by a very pretty waitress topless.

I ask you the question, twelve years later: could Anne-Marie Losique be a candidate for the Parti Québécois in Laval? Or would the local Liberal candidate find that it offends good morals?

Whoever has never read a magazine with one ever read 50 Shades of Grey under the sheets throw the first stone at him.

As I said to Benoit Dutrizac this week on QUB radio, “just because you show your nipples doesn't mean you don't have more brain. This young woman has committed no crime and yet she is dragged through the mud like the adulterous women in The Scarlet Letter, a novel written… in 1850.

But where do these puritans come from?

We live in Quebec, where the smallest village has its strip club and we should be scandalized because a young and pretty woman played in a film of buttocks?

In the province where careers were propelled by films like Valerie and Two Golden Women?

In Quebec, it's been a long time that we no longer take offense at the parts of legs in the air of our neighbors. One of our most famous writers, Nelly Arcan, didn't she describe in Putain her escort experience when she was a student at UQAM?

Misère, it was in Quebec that another UQAM arts student, Hélène Boudreau, rose to fame by having her topless photograph taken in her graduation photo before finding fame with gummy candies in the shape of a 'oursons.

Right now, I'm reading Misconduct, Emma Becker's latest book. This talented French writer had created quite a stir with her book La Maison, in which she recounted her years spent working in a brothel in Berlin.

In L' Misconduct, Becker tells how much she likes to “suck b…” and shares this little happiness with all the men around her.

But when I saw the Laval scandal, I asked myself this question: “Is there one thing that bothers men more than a woman who likes sex and does what she wants with her body? »