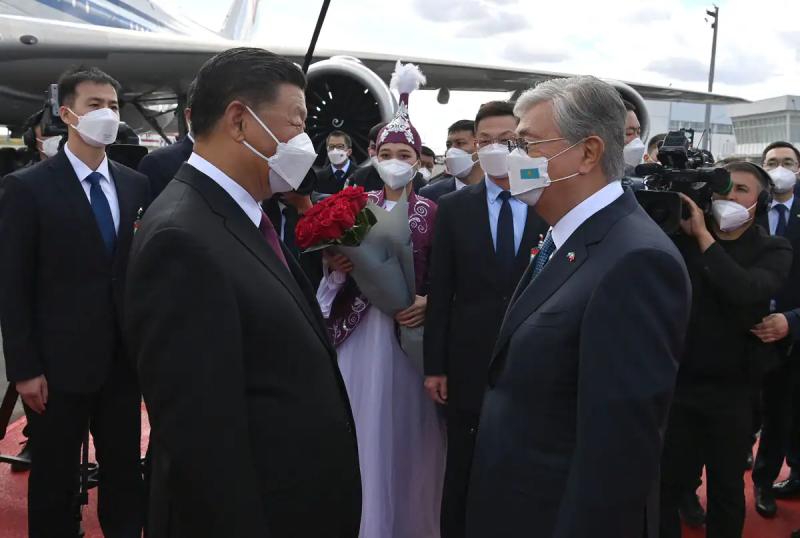 NUR-SULTAN | Chinese President Xi Jinping is in Kazakhstan on Wednesday for his first foreign visit since the start of the pandemic, on the eve of a regional summit with his Russian counterpart Vladimir Putin in particular to deepen their alliance against Westerners.

Xi Jinping, who will travel after this visit to Uzbekistan for a summit of the leaders of the member states of the Shanghai Cooperation Organization (SCO), had not left China since the first days of the Covid-19 pandemic in 2020.

Kazakhstan and Uzbekistan are two countries in ex-Soviet Central Asia, a region at the heart of the “New Silk Roads”, this vast project wanted by the Chinese president to improve the China's trade links with the rest of the world.

The Chinese leader's plane landed in the Kazakh capital of Nur-Sultan shortly after 0830 GMT.

Upon disembarking from the plane, Xi Jinping was greeted by Kazakh President Kassym-Jomart Tokayev, with the two leaders wearing masks as did their delegations and honor guard.

They then proceeded to went, each in their own car, to the presidential palace for a bilateral meeting.

On the eve of this trip, the Chinese leader promised to “defend common security” with Kazakhstan, in an article for the Kazakh press broadcast on Tuesday by Chinese public television CCTV.

In another article for the Uzbek press, Xi promised to “strengthen security cooperation.”

According to Xi Jinping, China wishes to cooperate with Kazakhstan in the fight against drug trafficking and international organized crime as well as against the three “scourges”, a term used by Beijing to refer to terrorism, separatism and religious extremism.

The Chinese government has already used this formula to justify the repression exerted in Xinjiang, a Chinese region bordering Kazakhstan, against the Muslim Uyghur population.

China is accused by Western countries and human rights organizations of locking up more than a million Uyghurs and other members of Muslim minorities, including Kazakhs, in camps. Beijing rejects these accusations, claiming to fight terrorism and ensure the development of the region.

Thousands of Kazakhs have family ties with inhabitants of Xinjiang, a region where Kazakhs constitute the second largest Turkish-speaking population after the Uyghurs.

Kazakhstan, a country rich in hydrocarbons which wants to deepen its important trade relations with China, tends to align itself with Beijing's position on Xinjiang.

But the country has nevertheless become a rear base for NGOs denouncing the situation in Xinjiang and reproaching the Kazakh authorities for their inaction.

After his visit to Kazakhstan, Xi Jinping will travel to Samarkand, an Uzbek architectural gem of the ancient Silk Road, for the SCO summit, scheduled for September 15-16.

The SCO is made up of China, Russia, four Asian countries –Kazakhstan, Kyrgyzstan, Uzbekistan and Tajikistan–, India and Pakistan.

“Alternative to the West”

Russia said Xi would meet Putin on the sidelines of the summit. Moscow, hit by Western sanctions over its offensive against Ukraine, is seeking to strengthen its ties with Beijing.

The Kremlin on Tuesday stressed that the SCO was “a real alternative to structures geared towards the West”.

Beijing did not condemn Moscow's interventions in Ukraine and denounced Western sanctions and arms sales to kyiv.

This trip is Xi Jinping's first outside China's borders since the early days of the Covid-19 pandemic.

His last trip abroad dates back to January 2020, to Burma. Within days of his return, the city of Wuhan had been locked down due to an outbreak of the novel coronavirus.

Since then, Xi has mainly conducted his diplomacy virtually. He nevertheless received several foreign leaders, including Mr. Putin, during the Beijing Winter Olympics in February.