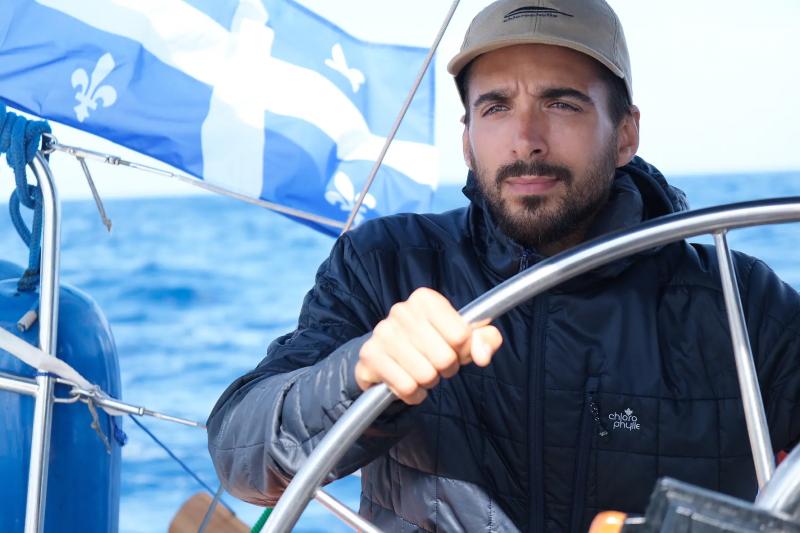 For a year, Yoann Perez, Elisabeth Fournier, Guillaume Perez and the dog Jackson sat on a 37 ft sailboat. Their objective ? Accomplish a double crossing of the Atlantic and document it all by themselves, by video. Thus was born the series Prendre le vent, the last episode of which aired last Thursday.

They traveled a total of 8,000 nautical miles. A year of adventures, challenges and memories etched forever for the three young globetrotters aboard the Bleuet. A sailboat so named in honor of the Quebec roots of the trio who also liked the reference to blueberries which, after a fire, are among the first to grow back with vigor.

« It's lively, dynamic, human and simple, explains Yoann Perez, 32, when asked to describe their 10 episode series. We are not pros, so it is natural and rather raw as content, even if a production house made us a great editing.  »

Presented on the airwaves of Évasion, this series, which has become a logbook and a souvenir album, has won over many fans of adventure, travel and sailing. Animal friends too, while the dog of the couple trained by Yoann and Elisabeth, Jackson, “became a real sea dog” – takes care of adding an absolutely cute side to this great trip.

“For me, it was a childhood dream to buy a sailboat and cross an ocean,” adds Yoann. Eli and my brother Guigui boarded with me. Together, we decided to cross the Atlantic, to visit the islanders and see what is happening with the oceans. The TV and cinema side was part of my dream. »

This double crossing of the Atlantic has led from the Magdalen Islands to the Azores, then from Cape Verde to Guadeloupe, a country where the two brothers from France lived part of their childhood and adolescence.

From these crossings, Yoann has accumulated a ton of memories and favorites. Among these: when he caught a shark with a fishing rod (and then released it), when a sperm whale came out of the water while the trio and even the dog were bathing in the ocean and the landing “when the clouds get denser and you see a piece of land coming,” he says.

As for his top 3 favorites of the adventure, he first insists on meeting people (“kindness, values”). Then, the fact of seeing again this Guadeloupe left 17 years ago in the company of his brother. Finally, the arrivals in cities that are different and euphoric, because reached after real battles.

” We've experienced everything in this adventure, continues the one who is about to launch his own agency of specialized trips in order to pass on his passion. Love, difficulties, even death (a person we met during the trip died), surprises, encounters with animals and successes: we experienced everything to the fullest! We were not disappointed by nature!  »

It is this nature that Yoann – who says he is open to other TV projects one day – now places at the center of everything. Less material and more human encounters, living more simply, doing small things, consuming less plastic, eating locally and prioritizing the nature that has welcomed them so well during this year that they will never forget.

►The series Prendre le vent will be rebroadcast on Évasion this summer.