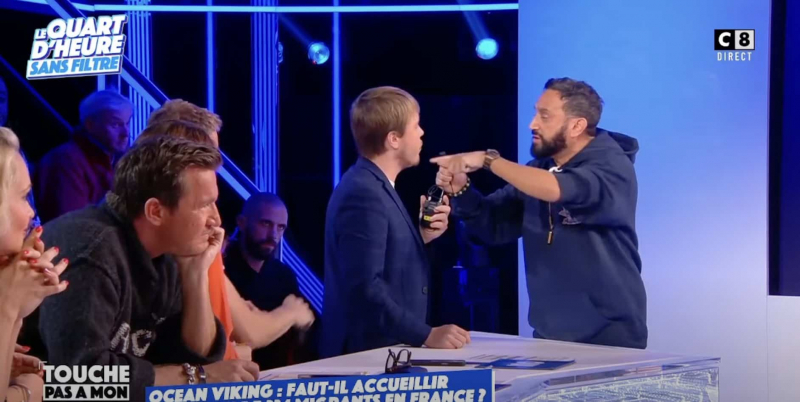 The deputy LFI Louis Boyard, taken to task Thursday by the host Cyril Hanouna on the C8 channel, called on Friday for a parliamentary commission of inquiry into “the interference of Vincent Bolloré” in the media of which he is the owner.

During a sequence devoted to the Ocean Viking migrant boat in the program “Touche pas à mon poste”, the guest Mr. Boyard, deputy since June and former columnist of the program, accused the “five people most rich people” of France to “impoverish Africa”. He quoted billionaire Vincent Bolloré, owner of the Canal+ group, to which C8 belongs.

– "You're free to say what you want
– Bollo.."
*cuts the floor and prevents from placing one* pic.twitter.com/8QzwvlNInq

The tone quickly rose with Mr. Hanouna. “You are shit”, launched the host, after having called the deputy “moron”, “jester” and “lost”. Mr. Boyard left under the boos of the public.

As of Thursday evening, the president of the deputies LFI Mathilde Panot indicated to seize Arcom, the audiovisual policeman.

In a press release, the elected representative of Val-de-Marne judges Friday that “it is not only an attempt to intimidate, but also a clear manifestation of the methods of censorship which are used to muzzle anyone who s would attack this billionaire's empire”.

🔴 What happened tonight on #TPMP is extremely serious.

No one says “shut the fuck up” to a member of my group.

Not even @CyrilHanouna and the lackeys of #Bolloré

We will not be silent.

“I will solemnly ask the office of our Assembly to open a commission of inquiry to measure the interference of Vincent Bolloré on the media he owns,” adds Mr. Boyard, who specifies that he wants to interview Mr. Bolloré and Mr. Hanouna.

“I don't spit in the hand that feeds me. After this sentence from @Cyrilhanouna we can't stop there, ”the MP also tweeted.

“I don't spit in the hand that feeds me”.

After this sentence from @Cyrilhanouna we can't stop there.

I ask our National Assembly to open a commission of inquiry.

It will focus on Bolloré's interference in our media and therefore on @TPMP. pic.twitter.com/4iLcpAVrB8

His political group registered on November 24, in his reserved day in the hemicycle, a bill “aiming to end the concentration in the media and the cultural industry”, which already targets Mr. Bolloré. But the text will probably not have time to be examined by the Assembly within the allotted window.

On #TPMP, Cyril Hanouna has just insulted me for having criticized Bolloré, owner of his channel.

Cyril Hanouna is as irresponsible with freedom of expression as he is with 'extreme right.

France is taking a worrying turn.

Vincent Bolloré is at the head of an empire which has one foot in industry (Bolloré group) and the other in the media (Vivendi). It is present in the audiovisual sector (Canal+ group and its C8 and CNews channels, radio Europe 1), the press (Prisma Media, the leading group of magazines in France, JDD, Paris-Match, etc.), advertising/communication ( Havas) or publishing (Editis).