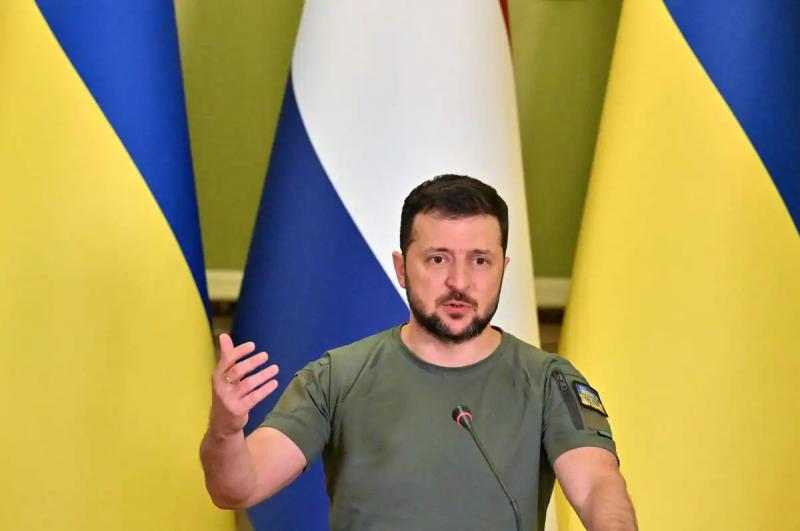 Ukrainian President Volodymyr Zelensky on Sunday evening announced the dismissal of the country's chief prosecutor and security service chief on multiple suspicions of treason by some of their subordinates for the benefit of the Russians.

“I have made the decision to relieve Prosecutor General” Iryna Venediktova, “and the head of the security services” (SBU) Ivan Bakanov from their duties, Zelensky said , as Russia continues its bombardment of several Ukrainian cities.

Ukrainian authorities are investigating more than 650 cases of suspected treason by local officials, including 60 in areas occupied by Russian and pro-Russian forces, he added in his evening address.

“Such a large number of crimes against the foundations of national security and the links established between Ukrainian law enforcement officials and Russian special services raise very serious questions for the leaders concerned. Each of these questions will be answered,” he continued.

Ms Venediktova led the investigation into the alleged atrocities committed at the start of the invasion by Russian forces in the town of Boutcha, a suburb north-west of kyiv, which in the eyes of the West has become a symbol of the “crimes of war” in Ukraine.

On Monday, European Union foreign ministers will debate tougher sanctions against Moscow, as the successive salvos adopted so far have isolated and hit hard economically Russia, without making it back down or renouncing its invasion launched on February 24.

They must consider two European Commission proposals to ban gold purchases from Russia to align EU sanctions with those of its G7 partners, and to blacklist new Russian personalities of the EU.

“Moscow must continue to pay a high price for its aggression,” European Commission President Ursula von der Leyen said on Friday after forwarding the new measures to the EU-20. Sept.

The Russian army has already lost 50,000 men, dead or wounded, and thousands of armored vehicles, according to the Chief of the British Armed Forces, Admiral Tony Radakin, i.e. “more than 30% of its effectiveness in ground combat”.

However, “the challenge posed by Russia will last”, he warned, stressing that betting on a health problem of Vladimir Putin or “that he ends up being murdered” was “pious wish”.

The master of the Kremlin affirmed at the beginning of the month that the Russian army had not yet started the serious things, and its Minister of Defense Sergei Shoigu ordered last week to “further increase” the military pressure.

Just three days after cruise missile strikes devastated the center of Vinnytsia, hundreds of kilometers from the front, killing at least 24 including children and sparking the European Union the denunciation of “barbaric behavior”, the bombardments continue.

Russia announced on Saturday that it had officially ended the “operational pause” of its army decreed eight days ago, and the bombardments resumed with more intensity in the Donbass (east), whose total control is the main objective. in the short term from Moscow.

Donetsk, one of the two provinces of Donbass, has been targeted by “the Russians (who) continue to bombard civilian infrastructure, especially educational institutions”, said the governor of the region, Pavlo Kyrylenko.

Pro-Russian separatists who have held part of the same region since 2014 have accused Ukrainian forces of firing 60 rockets from multiple Grad rocket launchers at a neighborhood in Donetsk.

“Buildings homes were hit,” they said, posting images of buildings reduced to rubble, without reporting casualties.

In the northeast, missiles struck on Saturday night in Sunday Kharkiv, the second city of the country, close to the Russian border.

Other strikes targeted Mykolaiv, a southern city near the Black Sea, and villages in the region, according to Vitaliy Kim, the local governor.

President Zelensky also criticized again on Sunday the Canadian decision, taken last week, to allow the return to Europe of turbines repaired in Canada and intended for the Russian gas pipeline Nord Stream.

He said he told Canadian Prime Minister Justin Trudeau, whom he spoke to on the phone during the day, that the Ukrainians would never accept this decision which he believes violates the regime sanctions against Russia.

“It's a question of respecting the sanctions. If there is a violation now, it won't be long before there are others,” the president added, accusing Russia of gas blackmail and pointing out that there were others. ways to bring Russian gas to Europe.

In Russia, Russian journalist Marina Ovsiannikova, who became famous after appearing live on television with a sign criticizing Moscow's offensive in Ukraine, was arrested on Sunday, her entourage and her lawyer said.

No official statement has been made on the reasons for her arrest, but it comes a few days after Ms. Ovsiannikova demonstrated alone near the Kremlin holding up a placard criticizing the military intervention in Ukraine and President Vladimir Putin.

The war in Ukraine will enter its sixth month on July 24 and there is no overall civilian casualty toll from the conflict so far. now.