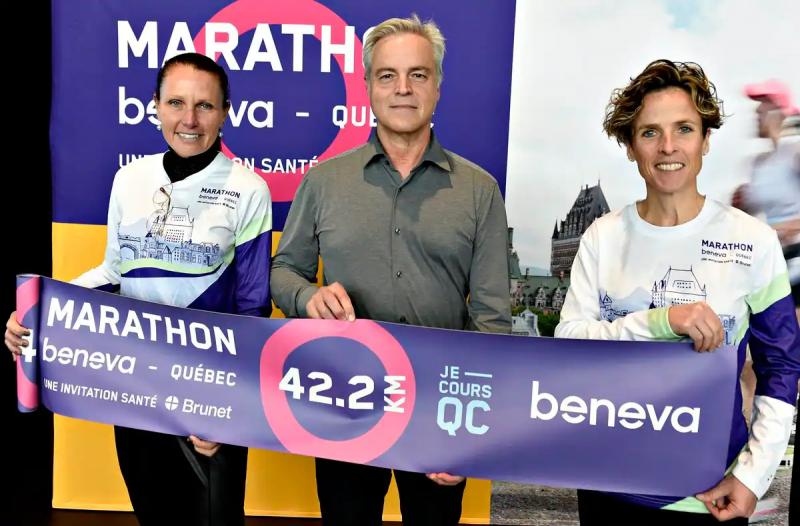 Deprived of its thousands of runners for the past two years, the streets of the Old Capital are about to vibrate again to the sound of the strides of some 8,000 participants who will take part in an “almost normal” edition of the Marathon Beneva de Québec, this weekend.

There was a certain excitement in the air when Marianne Pelchat, associate producer at Gestev, officially kicked off the event on Tuesday morning, in the main hall of the Videotron Center, not far from where located the start and finish lines.

“It feels good,” said Ms. Pelchat, a bit relieved at this “virtually back to normal” after two years of absence due to of the pandemic. “In sporting terms […] of the magnitude of the Marathon, at 8,000 runners, this is our biggest [event].”

For its big comeback, the organization announced last May a brand new “postcard” course that will highlight Quebec. Three boroughs and nine neighborhoods will be visited by marathon runners. Almost half of the route has been revised.

The new version, predicts Marianne Pelchat, will be “faster” and “easier”.

“The topography of the city being what it is, there is at some point a rise between Lower Town and Upper Town. In the old route, it took place around the 24th kilometer.

We know that over 42 kilometers, when you get closer to the 30th, it becomes more difficult. In the new course, it is at the 12th kilometer. […]. Then, there are longer downhill false flats.”

She intends to stay near the finish line to hear the comments of the participants. “The best feedback, we will have it at the end of the week”, she assures.

Calls to all heard

Appeals to all to find some 200 missing volunteers have found an echo in the population, also rejoiced Marianne Pelchat.

At the end of August and last week, the organization launched a cry from the heart since she lacked the arms to take care of the runners. “Immediately after the call to all […], the following Wednesday, the 200 positions were filled.”

For a third year, the Institut universitaire de cardiologie et de pneumologie de Québec – Université Laval will be on hand to support the medical team of the Marathon.

Dr. Jean Perron, cardiac surgeon, gave wise advice for runners who will take the streets of Quebec by storm.

“Listen to you,” he asks the athletes who might not feel well during the event.

“At the end of an ordeal like this, the symptoms are mixed. Is this my heart? Do you have a little cramp? It's safer to listen to each other too much than not to listen enough.”

Saturday will be devoted to young people (2 km) and families with the 5 km de la santé Beneva. The starts of the Sports Experts 10 km, the Kyndryl 21.1 km and the Beneva marathon (42.2 km) will be given on Sunday.

Running a marathon is one thing. Running a 100th marathon at age 76 while recovering from a back strain is a whole different ball game, but that's the challenge a seasoned running veteran will take on.

A hamstring problem that occurred in the last month followed by a turn of the kidneys a little over a week ago will not slow Gilles Lacasse down. Despite his health problems, he will be on the starting line at Place Jean-Béliveau on Sunday morning.

“I went through the full gamut of emotions. I haven't been lucky for a month, ”says Mr. Lacasse.

Except that it takes a little more to discourage the experienced runner. “It's my 100th and I've seen more!” he adds with conviction.

Go at his own pace

Several of his immediate family members will be on hand to celebrate the feat.&nbsp ;

A feat that Mr. Lacasse began to think about when he completed his 85th marathon, at the age of 70.

The former farm animal veterinarian for 43 years in Portneuf County, however, does not know when he will hang up his sneakers. He hasn't gotten there.

“As long as I can,” he replies when the subject comes up.

“I have fun at the start. It's crazy to say that. I get in the back and look at the lot of runners and runners in front of me, and I find them so good. You can't be at the start of a marathon if you haven't trained. These people, I find them good because I tell myself that they have done more than the average person who trains a little bit every day.

The wisdom acquired over the rides allows him to dare to offer advice for beginner runners.

Based on his experience, he recommends that they ” change [their] attitude” in the face of the challenge.

“People seem to be afraid to say: I ran the marathon, but I had to stop, I had to walk a minute here, two minutes there. People have to say to themselves, I'm running a marathon, I'm going to take a little break. […] they will arrive in a better position and they will have had the pleasure of having run a marathon and will not have taken care of the time. We have to stop there”, he analyzes.